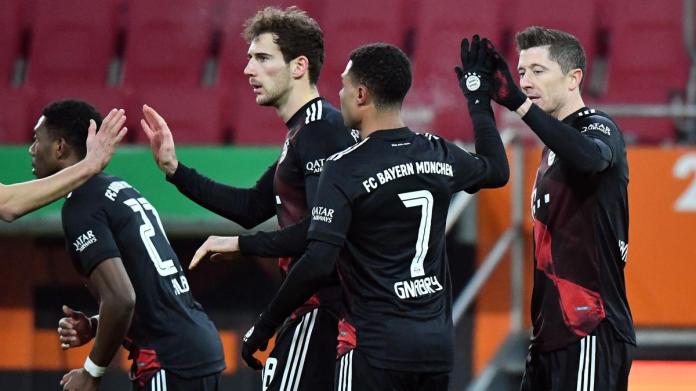 “We need this greed again, not only to save games over time”

Bayern solve the mandatory task in Augsburg. Against the FCA, the record champions only dominated in the first half, after which the tremors began. Joshua Kimmich is self-critical after the game.

Sieggarant Robert Lewandowski clapped his teammates in his thick down jacket, Manuel Neuer was happy about his zero record. FC Bayern wins again with the infamous Dusel and thanks to Lewandowski.

The  world footballer led the league leaders with a penalty (13th minute) with his 22nd goal of the season to a shaky 1-0 (1-0) in the derby at FC Augsburg.

“It’s not that light-footed right now. We need this greed again, not only to save the games over time, but to win them with sovereignty, ”said Bayern international Joshua Kimmich.

The  hosts gave away a huge chance to equalize with a penalty in the second half. “It was bitter today that we are left with empty hands,” said manager Stefan Reuter on “Sky”: “Every defeat hurts us extremely.”

After a shaky first run in the Bundesliga, Hansi Flicks star ensemble goes into the second half of the season as first with 39 points, championship title number nine in a row beckons. For the first time after almost three months – or eleven games – the triple champion played to zero. National goalkeeper Manuel Neuer equalized the record of former Bayern titans Oliver Kahn with his 196th white vest.

“That is special because we only scored one goal at the front. In the second half, we no longer had the natural way forward in our game. We didn’t take advantage of the goal chances and therefore had to fight back and forth with man and mouse. We have now achieved positive results again. Not with the earlier self-evident, but you can’t talk badly, “said Neuer after the game.

In Augsburg he formed the creative wing tongs with Kingsley Coman against compact and often deep in their own half at the beginning – coach Heiko Herrlich had done without a nominal striker. Counterattacks were the means of hope.

But against the fearful opponent, who had traveled by bus from Munich, there was not much to be gained at first. Munich let the ball run better than in the league defeats against Borussia Mönchengladbach and in the DFB Cup against second division Holstein Kiel, put pressure on the Augsburg goal and were rewarded with an early lead.

Lucas Hernández, who moved into Bayern’s defense for Alphonso Davies, quickly developed into an asset and was hit in the penalty area by Rani Khedira’s hosts. Penalty! Lewandowski loaded the strong Rafael Gikiewicz in the FCA box. Goal number 22 for the 32-year-old Poland in the 17th game of the season – the almost half-century old record of 40 goals from the 1971/72 season by ex-Bayern professional Gerd Müller could fall this year.

Lewandowski’s numbers are outstanding in many ways:

The  Polish striker has always scored in the past seven Bundesliga games. He has also played the last seven Bundesliga away gamesalways hit, so he set the all-time Bundesliga record. Lewandowski converted 44 of his 46 penalties for Bayern (all competitions including penalty shoot-outs).

But there was one thing that Munich had to do – also Lewandowski, who set his first record up to the substitution in 67. Minute – hold up:

The  exploitation of opportunities. Gnabry (23rd, 38th), Thomas Müller (23rd) and Lewandowski (24th, 42nd) failed. In part to Gikiewicz. Partly due to the lack of accuracy or the lack of luck, as with Lewandowski’s outside post hit shortly before the break.

Would that take revenge?

The  Bavarians were suddenly unrecognizable.

The  passable passing game, the scoring chances, the security – nothing of it was to be seen. Instead, they gave the Augsburgers space to develop and made the enemy strong again.

Herrlich recognized the opportunity, brought the attackers Alfred Finnbogason and Florian Niederlechner. And then France’s world champion Benjamin Pavard jumped the ball up his arm – a penalty for Augsburg. Bayern wavered again after Freiburg almost equalized in stoppage time. And this time: Finnbogason just hit the post.

“Not God, but close” – David Bowie died five years ago

Alltours tightens its hygiene concept: Holidays in hotels soon only for...

Intensive care physicians: The peak in the number of corona intensive...

Journey to a glacier grotto in the Swiss Valais