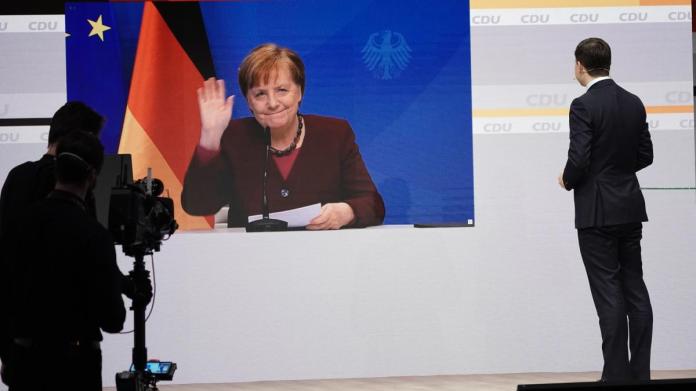 Es is a historic event. On Friday evening at 6.30 p.m., the CDU will start the first real digital party conference of a German party.

The  Greens already practiced a few weeks ago, but there was no vote on staff.

The  CDU does not have this until Saturday, if you disregard the post of member representative.

The  vote acts like a test run that succeeds. And it is not the first:

The  CDU has already carried out a dress rehearsal with all 1001 delegates and has set up a hotline with 50 helpers so that everyone can use the technology. Angela Merkel also scratched off the access code in front of the screen in the Chancellery, which every delegate has to enter for the digital voting booth, and dutifully clicked through the tutorials that were sent to everyone. None of this is trivial. A hacker attack by Russians or Chinese or any jokers would not only embarrass this party, but the whole democracy, which has to prove itself in the pandemic.

So historical, but that doesn’t mean exciting. Because the party almost only looks back for the first 90 minutes. That has to do with the fact that Annegret Kramp-Karrenbauer, the failed party leader, gives her report. She has not always been dealt with fairly, even by those who are now applying for her successor. But AKK doesn’t say a word about that. Instead, she hints at what else she failed, besides Merz and Laschet: the “experiment” of not having the chancellorship and party leadership in one hand. However, Angela Merkel forced this on her when she unexpectedly handed over the chairmanship to AKK in 2018 without warning.

Race for the CDU chairmanship

The  programmatic gap has been closed,” says AKK: “We have made up for it, we can now protect the climate”. However, there is still no prominent Christian Democrat who also represents the topic of the century as a person. And AKK’s new basic program has not yet been adopted.

At one point AKK’s speech seems almost counterfactual, namely when she talks about the corona pandemic: “We have an effective vaccine, now it’s about stimulating economic life again.” In fact, the vaccine is missing, Europe has ordered too little and too late and the manufacturer of the so far only available vaccine announced just in the morning that it would not even be able to deliver the promised quantities.

The re can also be no talk of an economic boost. On the contrary: further tightening of the lockdown is being discussed.

A reaction from the audience is not visible. Unlike the Greens, the Christian Democrats have refrained from giving their delegates the opportunity to send hearts and like symbols and the like on the screen.

AKK shows size that is also conveyed on the screen

At one point there would certainly have been many hearts for AKK: She is remarkably self-critical about her failure: “I no longer had enough authority and support”. But she does not denounce her internal party opponents, not even by hints, but says: “It hurts not to live up to your expectations and my own demands”. This has a size that is also conveyed on the screen.

The  debate after the speech of the party chairman, which in the CDU often degenerates into adulation even under normal conditions, this time turns into a parade of nice farewell words for AKK.

The  Prime Minister of Hesse, Volker Bouffier, recalled that it was her “greatest merit that the CDU and CSU are reunited”. When the top candidate for the state elections in Rhineland-Palatinate, Christian Baldauf, announced: “We’re giving you an evening in the world-famous restaurant in Deidesheim,” you feel as if you have come to a strange family celebration.

With all this thanks, it is all the more noticeable if it is missing: AKK neither thanked Angela Merkel for the cooperation, nor did the Chancellor mention her successor as party leader in a word.

In between there are talk show formats and films, it only becomes political again with the speech by General Secretary Paul Ziemiak. He is already the big winner of this party congress, if the technology doesn’t fail on Saturday. Because Ziemiak has actually brought a party that was “destroyed” by YouTubers in mid-2019 into the digital age.

In his speech, which, like all contributions, is much shorter than at normal party conventions, he is the first speaker to attack the political opponent. Anyone who rings the doorbell for the bourgeois Greens must fear that someone will open the door who advocates violence against police officers.

The y want to form a coalition with the eco-party if necessary, but not at any price: “

The  Greens will probably have to swallow more toads than they have carried across the street in their lives.”

The  delegates celebrate this in WhatsApp groups and some also on social networks. Digital discussions are also taking place as to which speaker may have already given a hint as to which of the three presidential candidates to vote for the next day.

When the Berlin Archbishop Heiner Koch spoke in the also digital prayer before the party convention, “the blind can support the lame and the lame can show the blind the way”, some joked that the man of God is the team Armin Laschet and Jens Spahn meant.

Serious exegesis was carried out by Angela Merkel, who was brought in from the Chancellery.

The  Chancellor said that she wanted “a team” to win. Only the duo Laschet-Spahn had used this term for themselves. And Markus Söder, who was connected from Munich, gave a hint: “Anyone who thinks that things will continue as before after Corona is wrong.” But Friedrich Merz said something like that in one of his last interviews.

Söder was the first and only speaker on the entire first day of the party congress who uttered the names Laschet, Merz and Röttgen. But its background was also taken as a clue. Söder was sitting in front of a bronze bust of Franz Josef Strauss – the first CSU candidate for chancellor.

Coronavirus: These stars made it through

The number of deaths at the end of February is well...

Favorite Artists on Spotify: Nobody has more streams than Bad Bunny