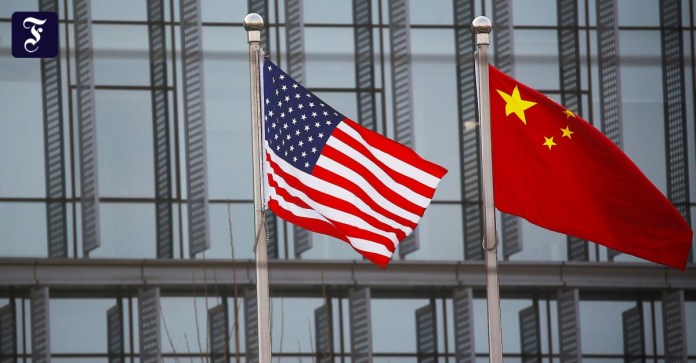 KJoe Biden was sworn in as the 46th President of the United States when China published a new sanctions list. It was one o’clock in the morning in Beijing at the time.  The  retaliation is directed against 28 former ministers and employees of the resigned Trump administration “and their immediate families”.

The y are no longer allowed to travel to China, including Hong Kong or Macau, according to a message that the Chinese Foreign Ministry sent to all foreign correspondents in Beijing during Biden’s inaugural address.

Companies or institutions associated with the 28 sanctioned people are no longer allowed to do business with China. This affects, for example, the former Secretary of State Mike Pompeo, the former National Security Advisor Robert O’Brien and his deputy Matthew Pottinger. Also on the list is former Health Minister Alex Azar, who drew Beijing’s wrath with a trip to Taiwan. Self-proclaimed “China hawks” are just as careful as security advisor John Bolton, who retired in 2019, and Trump’s former chief strategist Steve Bannon. Only ten of the 28 sanctioned people have been named so far.

A signal to the new government

For some of them, the punitive measures could be more than symbolic pinpricks.

The y could make it difficult for them to switch from politics to business. Beijing is breaking new ground by involving potential employers of former politicians in its retaliation.

At the time of publication, during Biden’s inaugural address, the leadership in Beijing also sends a signal to the new government. China apparently wants to make it clear that it will not be impressed by declarations of war from Washington. Biden’s foreign minister-designate, Antony Blinken, said in a Senate hearing on Tuesday that President Donald Trump’s tough approach to China was correct.

In the weeks leading up to the change of government in Washington, Beijing had sent conflicting signals and held the door open for relations to de-escalate. On the one hand, Foreign Minister Wang Yi spoke of a “new window of hope” and a “new fork in the road” in Sino-US relations. On the other hand, Beijing presented itself self-confidently and openly as a system rival. From the second and third ranks of power, slogans such as “the United States is sick, China has stabilized and the world has changed” or “the east is rising and the west is falling” have recently been heard.

In the announcement from the Chinese Foreign Ministry, the sanctioned were accused of “stirring up hatred of China”, “taking a series of crazy measures” and “seriously violating China’s sovereignty”. In the past few days, China had already announced the sanctions and signaled that they should be understood as retaliation for American sanctions in connection with Hong Kong and for changed American rules in dealing with Taiwan.

Key scenes of the Covid debate – Martullo-Blocher brings the SVP... SATA SSD: Samsung should bring the 870 Evo in a classic...