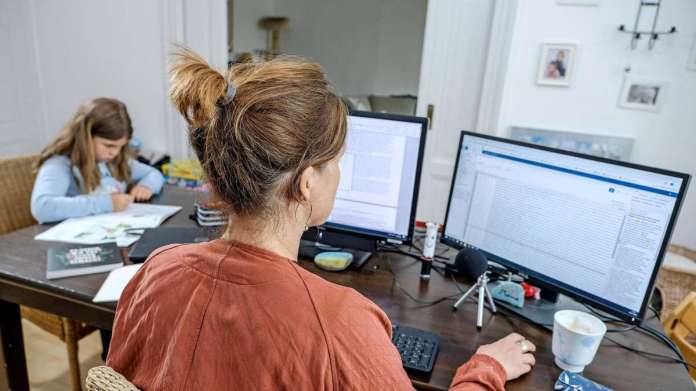 Organizing distance and face-to-face classes at the same time is difficult. Especially since there is a lack of laptops in some places. Visits to various schools in Frankfurt.

The first pupils arrive at the Engelbert-Humperdinck-Schule on Monday around 15 minutes to eight. Most are brought by parents. Still in the dark and in freezing cold. About 150 children appear in the primary school in Frankfurt’s Westend on this day. There are many reasons for parents to send their child to face-to-face classes. Some do not have the capacity for care in the home office. Laura Cipullo, for example, is in training herself and has online lessons. “I won’t be able to look after my daughter.” Other parents like Christian Meyer-Delius are employed. “We don’t have the option of looking after the child at home. And we couldn’t take a vacation either. “

School day 1 in 2021: From the seventh grade onwards, due to the pandemic, there are only distance classes, exceptions apply to the final classes because they have to prepare for exams. The compulsory attendance for grades one to six is ​​suspended, parents should leave their children at home if possible. At the Comenius School, a primary school in the Nordend, a third of the children – 120 – went to school that day. “In some classes there are five children, in others there are twelve or 13,” says the acting headmaster Christian Uhling-Neumann. All teachers are present to look after the children. Learning groups in which the minimum distance can be maintained should now be formed. “Despite asking the parents, we didn’t know exactly how many were coming today.”

The Ministry of Culture provides that children receive the same learning material at home as those in the classroom. For distance teaching, learning packages have been put together at the Comenius School. However, so that the teachers can work in distance teaching and also offer video conferences, “they have to go to their home PC,” says Uhling-Neumann. That is not possible in school. But the more children there are in school, the fewer teachers can stay at home on their computers. Uhling-Neumann finds himself in a bind. “In the letter from the Minister of Education and Cultural Affairs, it says that there should be classroom and distance teaching,” he says. “There is no talk of care or emergency care in the school.” But how face-to-face and distance teaching should run equally and simultaneously when the teachers are needed for the many children at the school, “that still has to be shaken,” says Uhling-Neumann. Perhaps representatives could be recruited to provide support.

Christina Raab, director of the Theobald-Ziegler-Grundschule in Preungesheim, considers the face-to-face teaching to be “unhappy” in the ministerial letter. In the letter to parents, she did not speak of lessons in school. “Parents shouldn’t think that more happens at school than at home,” she says. Ultimately, the goal is that as many children as possible stay at home and all receive the same lesson content. “With us there is only one supervision for the children in school when completing the tasks. No class.”

At the Theobald-Ziegler, eleven percent of the children went to school on Monday. That’s 38. “We also called many families again to make it clear that the children didn’t miss anything at home.” The third and fourth grades are now almost completely at home, so the teachers can stay at home and from there on Teach computers. Since the first lockdown, working on the laptop has been practiced with the children, says Raab.

The few children in school take part in lessons on the PC. The younger children picked up materials, weekly and daily plans that day. Only these plans are processed in the school. “And every day the colleagues call their students at home,” says Raab. “Nobody has any advantages or disadvantages because they are at school or at home.”

The State Education Authority has not yet evaluated the numbers of how many students took part in face-to-face classes in grades one to six on that first day of school. But head of department Evelin Spyra can already say: “It varies a lot in the schools.” At some, a third of the children are present. “There are also schools where there is no child at all.”

In any case, the content should be done in the schools what the children do at home, says Spyra. “But it may turn out that access to it at home is different.” For example, children at home could possibly discuss their tasks in video conferences with the teachers. Perhaps this would also mean that children would have to be trained in distance lessons at other times. “The headmasters are very creative,” says Spyra. In any case, face-to-face teaching is not intended as emergency care. “It’s class,” says Spyra. “But none of that is easy and it is a challenge for everyone.”

At the Adorno-Gymnasium there is in principle distance lessons for everyone. Of the 400 fifth and sixth graders, 51 came – they too are sitting at the computer in school, the teachers teach from home according to the schedule. Since sport is currently not being taught at all, physical education teachers take care of the children in school. There are five to six video conferences for each student per week. If there are any other questions about the tasks, “then they can be asked during class,” says the school principal Mathias Koepsell. The teachers can be reached online in the school portal according to the timetable.

At Lessing-Gymnasium, 15 of the 120 fifth and sixth graders attended – in addition to the senior year. “We have given priority to distance learning,” says school director Bernhard Mieles. As at the Adorno, the teachers teach from home, and so do the students: inside the school, sit at the PC and are looked after by substitute or sports teachers. “This is how it works now, but we were trembling beforehand,” says Mieles. Because if significantly more students had come, “then we would have had to change”. The number of laptops for children who do not have a device at home was also sufficient. Mieles is currently also provisional director of the Friedrich-Dessauer-Oberstufengymnasium. “All the laptops are gone there, we could use a few more.”

Perhaps Mieles will also get the “We are in the process of doing this,” says Education Department Head Sylvia Weber (SPD), “asking the schools whether they still need anything at short notice.”

Berlin & Brandenburg: ADAC expects little travel at the turn of... 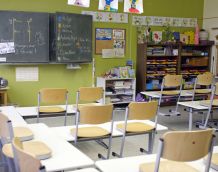 46 Transfers from Just One Club: The Strange World of Third...