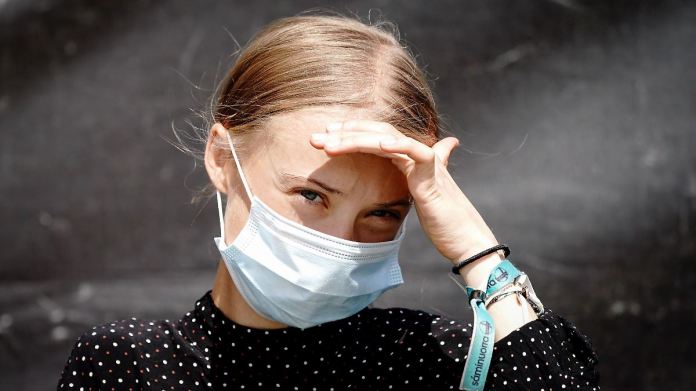 Climate activist turns 18
Greta Thunberg is no longer a child

When she was 15, Greta Thunberg protested for the first time in Stockholm, holding a piece of wood with the words “#Skolstrejk för klimatet” on it. Now the Swede is coming of age and still inspires children all over the world. Some are critical of their radicalism.
Again and again Greta Thunberg pointed out that it could not be the responsibility of children to save the earth from the impending climate catastrophe. “I’m too young for this. We children shouldn’t have to do that,” the young Swede said on Facebook at the beginning of 2019, when online hatred and conspiracy theories against her came to a head for the first time. Or a short time later in the British House of Commons: “I know that many of you do not want to listen to us – you say we are just children. But we are just repeating the message of united climate science,” she said. “ We children do this to wake the adults up.”

Thunberg is no longer a child. The world-famous climate activist turns 18 this Sunday. In Sweden, too, this is associated with coming of age and with a number of rights: driving alone, for example, getting married – and choosing what will be particularly important to you. “ Every election is a climate election,” Thunberg has often said. Now she can cast her own vote, including in the next Swedish parliamentary election in late summer 2022.

In the fight against the climate crisis, at the head of which she literally sat in the summer of 2018, nothing changes for Thunberg when she comes of age. She continues to insist that the climate and environmental crisis must be treated like a real crisis – immediately. “The most important thing is to understand that we have to reduce emissions here and now – not in 2025, 2030 or whatever. The emissions we cause now determine our future,” she told the Swedish daily “ Svenska Dagbladet”. . Even if she can withdraw at any time, she is not thinking of quitting. “ No, this is too important.”

The Stockholm native, who was born on January 3, 2003, has long been concerned with the issue of climate change. According to her own statements, she first heard of environmental degradation and global warming when she was eight years old. This gave rise to worries that resulted in depression in childhood.

“ No one is too small to make a difference”

In the summer of 2018, she and her father bought a piece of wood on which she wrote “#Skolstrejk för klimatet” ( School strike for the climate) in large black letters. The then 15-year-old girl crouched in front of the Reichstag in Stockholm at the beginning of the new school year to call on Swedish policy to strengthen climate protection and to follow the Paris climate goals. As a sign of the urgency of their concern, Thunberg skipped school – initially every day, then only on Fridays.

Their action spread rapidly on social networks. The climate movement Fridays for Future emerged, and Thunberg’s silent solo protest developed within months, with millions of people all over the world taking to the streets for more climate protection, following Thunberg’s example. And the girl, not even 1.60 meters tall, proved: “ No one is too small to make a difference.” Nobody is too small to make a difference.

Since then, nobody has raised the profile of climate and environmental problems as effectively as the teenager from Stockholm. Nobody has become such a great role model for millions of mainly young people worldwide – and hardly anyone has been showered with so much hatred and insults, especially on the Internet. These experiences have also shaped Thunberg.

She now protects her privacy strongly. Interviews with her have become rarer – and when they do, she urges her to focus on climate issues rather than on her as a person. Rising temperatures, more violent natural disasters, rising sea levels – that’s what it’s about. She is now using her fame more to draw attention to the struggle of other climate protectors, Vanessa Nakate from Uganda, for example, or fellow campaigners in the Philippines or in South America.

“There are no gray areas when it comes to survival”

Thunberg is actually reserved, has a quiet voice and a subliminal sense of humor, for example when she talks about Donald Trump. She has Asperger’s, a form of autism that she herself describes as a benefit. A lot of things are just either black or white for them, and there is often no middle ground for them, she says. In relation to the impending climate catastrophe, this means: A little bit of world saving is simply not possible. “There are no gray areas when it comes to survival.” And so Thunberg threw himself into the climate fight with full force for years.

In 2019 the climate protests inspired by her reached their climax for the time being, in 2020 this was temporarily limited by Corona. Thunberg fought on. Met Angela Merkel in summer to talk to the Chancellor about EU climate policy with close colleagues like Luisa Neubauer from Germany and Anuna de Wever and Adélaïde Charlier from Belgium. Thunberg made a special trip to Berlin for this – immediately before starting her high school at home in Stockholm after a year off school, during which she had sailed to the USA for her climate fight.

To this day, Thunberg has not been able to and cannot pick up everyone with her message. Their vegan lifestyle, which renounces new clothes and air travel, is too radical for some. But even if you don’t agree with everything Thunberg says or do, you have to admire her courage and determination, said her Swedish compatriot Björn Ulvaeus, the Abba star, once about her. Thunberg was “like a defiant and deeply thoughtful Pippi Longstocking,” he said. “I think Astrid Lindgren would have liked Greta.”

Official photos from the reboot and details of the plot

U20 World Cup: Germany in the quarterfinals, Sweden series rips –...

Last US consulates in Russia to be closed – politics –

2021: These trends will shape companies

Denmark plans surprising action against the 2022 World Cup in Qatar