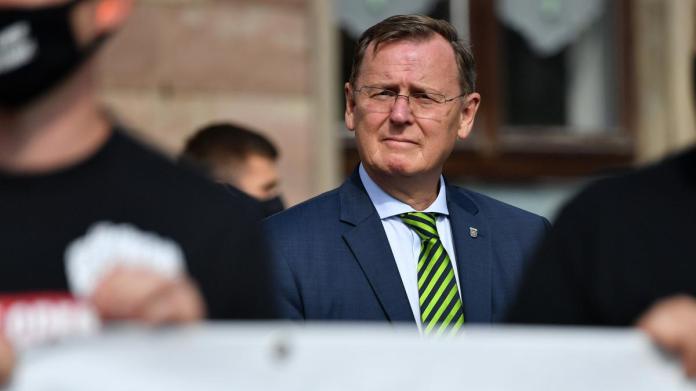 IAt the Prime Minister’s Conference, paddling around on your smartphone and belittling the Chancellor as “Merkelchen”: Just a few days after the start of the hype about the Clubhouse talk app in Germany, the first top politician got into trouble with casual chats. And the criticism of Thuringia’s Prime Minister Bodo Ramelow after his casual appearance in the app has not yet subsided – on Monday it was also loud in Ramelow’s own cabinet.

The  left-wing politician has now apologized in various ways for his statements on Saturday night.

The  communicative faux pas could also haunt him in the new week.

Ramelow joined a group of many young people late on Friday evening. In the course of the conversation, which up to 3,000 people listened to, he spoke about the Prime Minister’s Conference (MPK). He referred to the Chancellor as “Merkelchen” and revealed that he also played up to ten levels “Candy Crush”, a popular mobile phone game, in the MPK. Johannes Boie, editor-in-chief of WELT AM SONNTAG, reported on it. Ramelow complained about the publication.

This text sparked the debate:

The urer asked on Monday the question of the “self-control of some politicians” when it comes to the Clubhouse app. “Just as Robert Habeck once uninstalled Twitter because he lacked the discipline for this app, similar questions arise when Philipp Amthor (CDU) or Bodo Ramelow serenades at night,” said the Bundestag member of the German Press Agency .

Ramelow is considered to be a person who is very affine for new media and likes to use their different channels for his communication.

The  latest hit is the Clubhouse audio app. In the social media app from the USA, users can take part in panel discussions. Ramelow has been registered since January 21, according to the app.

“Merkelchen” taken out of context?

“Some play Sudoku, others play chess or Scrabble on their cell phones, and I play ‘Candy Crush'”, Ramelow told the dpa on Sunday.

The  report that he had called the Chancellor “Merkelchen” was taken out of context, said the left-wing politician of the dpa.

Above all, the Prime Minister must defend himself against the accusation that he is not acting responsibly during the most important consultations in the fight against the corona pandemic. “If it turns out that Bodo Ramelow is playing mobile phone games during the Prime Minister’s Conference, then he should check his behavior,” Thuringia’s Interior Minister Georg Maier (SPD) told the editorial network Germany (RND). “

Ramelow tried to keep the damage as small as possible, aggressively and with numerous apologies. “As soon as I turn on this format now, I notice that in the back of my mind I have the learning curve from the day before yesterday and yesterday,” said the left-wing politician on Sunday when he appeared again at Clubhouse.

He explicitly apologized for the phrase “Merkelchen”: “A clever woman has just conclusively explained the actual faux pas of my clubhouse chat to me on @clubhouse_de and it convinced me,” Ramelow tweeted on Sunday evening. “To belittle the name of the Chancellor was an act of male ignorance. I sincerely apologize for that. “

Ramelow defended himself that he sometimes played “Candy Crush” during the federal-state consultations. If you know that a prime ministerial conference currently lasts around ten hours and contains a lot of idle time, “then I like to admit that one person is playing Sudoku, the other is knitting or crocheting or doing something else – and I just play ‘Candy Crush’. “

Thuringia’s CDU boss Christian Hirte considers this to be disrespectful and irresponsible. “Either it is an expression of arrogance of power or fatigue,” wrote Hirte on Sunday on Twitter. Fighting the corona pandemic is about life and death as well as the livelihoods and the future of a generation of students. “Anyone who understands his office as Prime Minister in this way is losing the trust of the citizens,” wrote Hirte.

The  Thuringian FDP parliamentary group described Ramelow’s actions in the corona pandemic as chaotic, the AfD member of the Bundestag Stephan Brandner rated Ramelow as “embarrassing for Thuringia”.

From the point of view of FDP politician

The urer, Ramelow’s revelations give an idea of ​​”how things are going with the level of discussion in the escalating prime ministerial circles”. “

The  fact that this round has de facto relocated a large part of the legislative functions in Germany from the Bundestag and Landtag to the back room is completely unacceptable.

The  decisions and the discussion about them have to go back to the parliaments, ”said

The urer of the dpa – thereby repeating a demand made time and again by the liberals.

Kramer only fourth on the large hill

ROUNDUP: Laschet and Spahn want a ‘decade of modernization’ for Germany