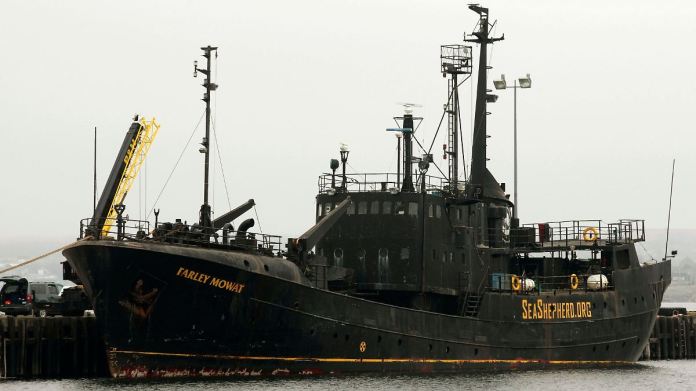 They want to collect abandoned fishing nets to protect endangered porpoises – Sea Shepherd activists are attacked by fishermen off the Mexican coast. One of the men now dies after a collision with the boat of the environmentalists.
A Mexican fisherman died after his cutter collided with a boat belonging to the environmental organization Sea Sheperd. After the accident on December 31 in a marine sanctuary for the California harbor porpoise, the fisherman was admitted to a hospital in the northwestern city of Mexicali with serious injuries, including broken pelvis, said Alonso Pérez, head of the regional health authority. Now the fisherman has died, it was said. The condition of a second fisherman who was injured in the collision was stable.

According to the Mexican Navy, Sea Shepherd activists had been collecting floating fishing nets in the Gulf of California when they were “attacked by fishermen with homemade explosives.” The Sea Shepherd organization said the fishermen had thrown Molotov cocktails on their boats “Farley Mowat” and “Sharpie”. The “Farley Mowat”, a former US coastal defense ship, then tried to leave the area, but a fishing cutter “aggressively” got in the way of the boat and hit the hull of the “Farley Mowat” broken apart.

The family of the late fisherman accuses the Sea Shepherd boat of deliberately ramming the fishing trawler. In online networks she demanded that the death of her loved one should “not go unpunished”. Sea Shepherd boats and activists have been repeatedly attacked while patrolling the marine reserve. Mexico put the area under protection to protect the world’s smallest species of harbor porpoise.

The California porpoise, also known as vaquita, is critically endangered. The marine mammals repeatedly end up in illegally deployed gillnets with which fishermen want to catch the also threatened Totoaba fish. The vaquita only lives in the Gulf of California. In 2005, UNESCO declared the islands and protected areas in the Gulf of California a World Heritage Site. Due to the impending extinction of the vaquitas, the area has been listed as a threatened world heritage since 2019.

Playstation, Xbox, Switch or Oculus Quest: This is what distinguishes the...

How Meghan managed to keep pregnancy a secret for so long

Urs Fischer and Union Berlin with another coup

Another attack on a money transporter in Berlin