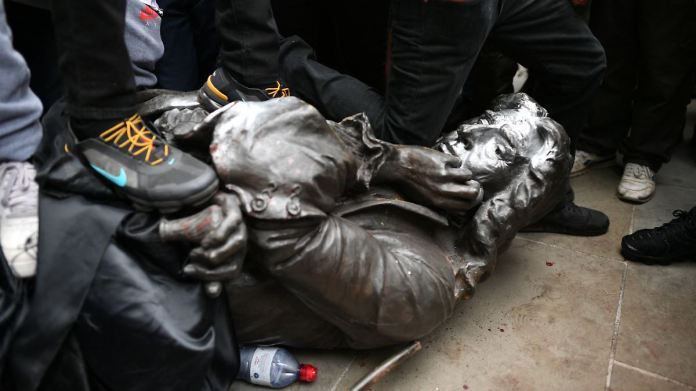 The  fact that the statue of a slave trader in Bristol ended up in the harbor basin was the climax of the Black Lives Matter protests in England. Now the trial against four demonstrators starts. And the dispute over the interpretation of British colonial history continues.
When it comes to their heroes, many Brits look very carefully. Where the bust of Winston Churchill from the Oval Office was, a BBC reporter asked the spokeswoman for the new President Joe Biden immediately after the change in power in the USA.

The  World War Prime Minister is an example of a sometimes heated debate that sparked protests in the summer and is still a source of controversy, right up to the current Prime Minister and Churchill admirer Boris Johnson.

How is history conveyed – and what does this mean for a society? Since this Monday, the protests have been in focus again. In Bristol, West England, four demonstrators have to answer for property damage in court.

The y are said to have thrown the monument of a certain Edward Colston into the harbor basin on June 7, 2020. Colston was a benefactor to the city, several streets and buildings are named after him, but he was also a slave trader.

When the Black Lives Matter protests for blacks rights spilled over from the US to the UK, it wasn’t long before the Colston Memorial was ripped from its pedestal. “This statue is a slap in the face for all blacks,” one protester grumbled into the BBC cameras. Colston’s fall triggered an iconoclasm that did not stop at a statue of Churchill in front of Parliament in London.

Johnson no longer wants to be “ashamed”

The re is a rift through British society when it comes to coming to terms with history.

The re is no doubt about Johnson’s position. “I think it is time we stopped being ashamed of our history, our traditions and our culture,” the head of government rumbled in the summer and called for “this attack of self-discrimination to be stopped”.

The  question was whether at the annual concert event “Last Night of the Proms” two patriotic songs should not be played for once without singing.

“We need a debate about structural racism,” calls the sociologist Shahnaz Akhter from the University of Warwick in Coventry in an interview. Formula 1 world champion Lewis Hamilton also denounced the issue. Cambridge University sociologist Ali Meghji says black people are disadvantaged in many areas in the UK. Almost half of black children live in poverty, black women are twice as likely to be unemployed as white, and black young people are more likely to be imprisoned than white.

The  government did not understand why the protests were necessary. It condemns the protesters more than the social problems they are fighting,” says Meghji. Johnson and Home Secretary Priti Patel criticized the fall of the monument in Bristol as a “criminal act”. Government Equal Opportunities Officer Liz Truss believes that debates about discrimination are too often driven by “fashionable” issues such as ethnicity. And building minister Robert Jenrick wrote in the Sunday Telegraph: “We will save Britain’s statues from the vigilant militants who want to censor our past.”

This attitude is also due to the fact that the sometimes bloody and racist colonial history of the United Kingdom has never been dealt with, say experts. Many British people still define themselves through the Empire.

An anecdote from Johnson’s visit to Myanmar, the former Burma when he was foreign minister, symbolizes the lax handling of history.

The re Johnson quoted the poem “

The  Road to Mandalay” by the colonialist writer Rudyard Kipling (“

The  Jungle Book”). Finally, the British ambassador stepped in and called it “inappropriate” in front of the cameras.

Another example: When the former US President Barack Obama banned the Churchill bust once before, Johnson blamed “the partial Kenyan president’s aversion to the British Empire” for it.

The  answer from the White House, where the Churchill statue is now again, is still a long time coming. In any case, the fall of the monument had consequences in Bristol.

The  statue was moved to a museum, a school and an event hall were renamed. USA: US House of Representatives cancels session due to concerns about new attack – Politics

SpaceX rocket landed for the first time – and then exploded

Heightened alert in Washington: According to police, militia plans to attack the Capitol – Politics

Nicola Sturgeon testifies in a committee of inquiry

Missile landed for the first time – and then exploded

The mass exodus of Iraqi Christians

Tirol monitors COVID patients in quarantine with an app

After two doses of vaccine effectiveness of almost 96 percent –...