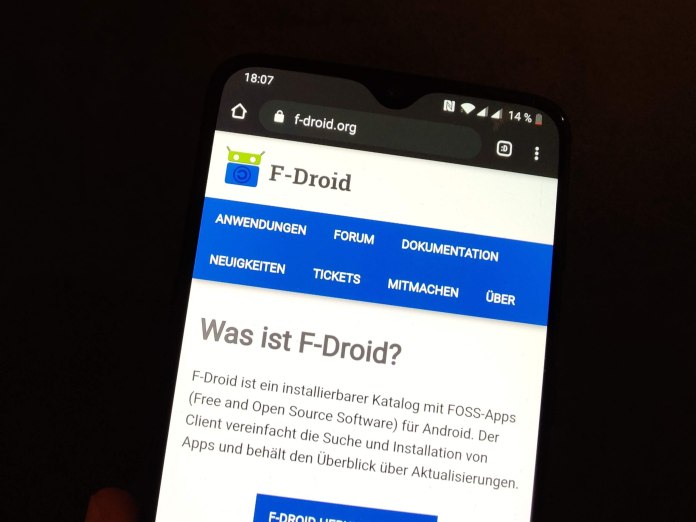 All apps free and open source – that is what the alternative app database F-Droid promises. TECHBOOK has found out what is behind the joint project.

F-Droid was founded in 2010 by British video game developer Ciaran Gultnieks. Today the private company F-Droid Limited runs the project. It is a community-based, alternative “App Store” for the Android operating system. The app database can be understood as the equivalent of the Google Play Store, as it also provides users with access to a large number of apps for download.

A different kind of app store

Unlike the Play Store, F-Droid doesn’t charge developers to distribute their apps through the store. F-Droid is also not tied to other services. The Play Store, for example, only works if the entire Google apps suite is installed on the Android smartphone. Including the Google Play services, the Google app and many more.

In principle, the AOSP is the pure form of the Android operating system. All smartphones, including those from Google itself, come with a modified version. Almost every manufacturer relies on its own user interface, which Android partially strongly customize – with additional functions and a different look. Almost all Android smartphones are also equipped with Google apps to get access to the Play Store. Huawei, for example, is an exception, as access is denied. Instead, Huawei relies on its own Play Store alternative called “App Gallery”. Samsung also offers its own app store with the “Galaxy Store”, but only as an alternative to the Google Play Store, which is also installed.

F-Droid can be used as the sole app store on a smartphone without Google apps. Corresponding apps for e-mail, maps and chats are available there. The Android-based operating system “Replicant”, for example, uses F-Droid to provide apps. The aim of the system is to replace any proprietary components of Android with free, open source alternatives. However, since most of them have an Android smartphone on which the Play Store is already installed, we see F-Droid as an alternative to Google’s offer.

Find out how to free your Android smartphone from Google.

The advantage of F-Droid is that the apps to be found in it get by without advertising and without access to user data. So if you want to have access to popular apps like WhatsApp and Snapchat, but prefer to protect your private data with other apps like e-mail and maps, then F-Droid is the right choice.

Open source means that the source code of the apps is freely available and can be used by other developers without restrictions. Developers are therefore not allowed to upload apps with so-called “proprietary code” – code that only they know. The advantage of this is that all apps are open books and cannot hide any secrets about how they handle any user data. The source code can be found directly on the page of the respective app in F-Droid.

Users also do not have to log in to download and install apps. In addition, F-Droid keeps a list of apps with so-called „Anti-Features“ , or “undesirable features” that are also noted on the respective app page. Anti-features include advertising, user tracking and additional services that are subject to a fee.

The disadvantage of F-Droid is relatively clear: the archive only contains a little more than 3000 apps. An unequal ratio to the more than 3 million apps available in the Google Play Store.

A practical function in F-Droid is the sharing of apps via Wi-Fi direct, Bluetooth or Android Beam. The Google Play Store recently got a similar function with Nearby Share.

How do you get F-Droid?

F-Droid is available free of charge from https://f-droid.org/. There, users download a so-called “Android Application Package” – “APK” for short. You then have to install this data package in order to be able to use the app. For this it is necessary to reimburse the installation from unknown sources when the operating system asks for access. Don’t worry, after installation you can revoke this authorization in the app overview in the Android settings.

How secure are F-Droid apps?

Large app stores like Google Play and the Apple App Store are struggling to keep malicious and dangerous apps out. The Play Store uses “Play Protect” to scan apps for malware.

F-Droid does not have this protection. Developers can upload their apps without restriction as long as no proprietary code can be found in them. After all, by looking directly into the source code, others can quickly determine whether it is legitimate software. In addition, the range of F-Droid is still quite limited. That is why the platform is rather uninteresting for hackers.

To protect against tracking, F-Droid uses the Tor network. It is therefore not possible to immediately follow what users download from the app archive. Before the download, the transparent “anti-features” label can be used to quickly identify whether an app has unwanted components such as advertising or tracking.

F-Droid offers updates for apps installed from the archive. So when a developer loads a security patch for her own app into the F-Droid archive, it appears automatically on the smartphone.

The OsmAnd + app is an excellent alternative for Google Maps, which, in addition to standard functions such as navigation, comes with a built-in travel guide with information from Wikivoyage and extensions such as a nautical map and contour lines.

The duck browser should always be the first choice for surfing the Internet. Instead of the Google search, the browser uses its own Duckduckgo search, in which the anonymity of the user comes first.

K-9 Mail looks older than it is due to the old-fashioned user interface, but you shouldn’t be fooled by that. Registering with your own email address, be it Outlook, GMX or the like, works perfectly. The range of functions is also right once you get used to the app.

NewPipe gives you access to the YouTube video portal without running the risk of everything you look at there being combined into a behavior profile on Google. We liked the app’s interface almost better than that of YouTube itself and even functions like downloading videos are possible.

Germany does not want a Bundeswehr combat mission in the Sahel...

PSA shareholders give okay for mega merger with Fiat Chrysler

Masepin “anything but easy to iron”