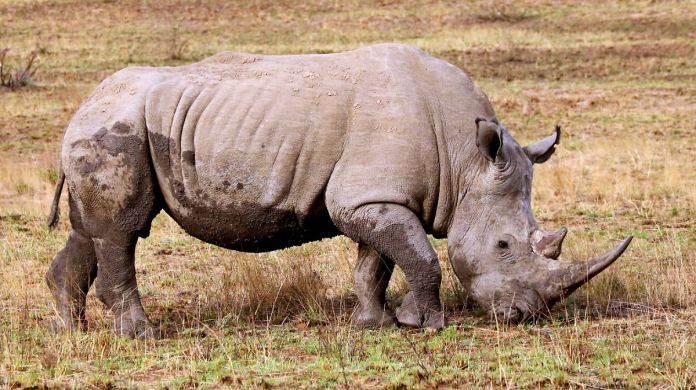 Kanchi doesn’t eat properly, doesn’t respond to calls – the white rhinoceros in the Bangladesh Zoo is depressed. His keepers now have a plan for how to cheer it up.
Because of her depression, a lonely rhinoceros lady in a zoo in Bangladesh is given two sheep for company in her enclosure. It has worked before, said zoo director Abdul Latif.  The  rhinoceros’s former partner died a good seven years ago and the female rhinoceros Kanchi was also depressed back then. A sheep was able to cheer her up for a few years – until it became seriously ill in 2019.

The  zoo is actually looking for a partner for the 13-year-old animal. According to Latif, this has not yet worked because of corona restrictions. Rhino Kanchi is depressed, said zookeeper Farid Mia.

The  animal would leave half of the feed behind, most of the time just lying in a ditch and not responding to its calls for hours.

The  animal is actually one of the main attractions of the zoo, which, according to its own statements, is visited by four million people every year. Now she really needs a partner for Kanchi, says Mia. Also because she is still fertile and rhinos can live up to 40 years in captivity.

Other zoos have also placed rhinos with ungulates in an enclosure, says species protection expert James Brückner from the German Animal Welfare Association. That could work, but it is not always unproblematic, since in individual cases attacks against the other animal species can occur.

Usually they live in groups

Whether Kanchi’s change in behavior is actually due to a lack of comrades or to other aspects of her husbandry conditions is difficult to say, says animal rescue director at IFAW, Katie Moore. Nabu conservation expert Barbara Maas adds that white rhinos like Kanchi have a complex social structure. Females lived in groups of up to 14 individuals with their calves. Adult bulls, however, occupied territories and mostly lived as solitary animals. So you would find a rhino partner better. This is what the European Association of Zoos and Aquaria (EAZA) suggests on its website for keeping.

According to Nabu, white rhinos have been around on earth for 50 million years. According to the International Union for Conservation of Nature (IUCN), there are still a good 10,000 specimens of the southern white rhinoceros in the wild.

The re are only two closely guarded specimens of the northern white rhinoceros.

Arrested in Moscow – Alexei Navalny sentenced to 30 days in...

Hopefully the AfD will continue to disassemble itself

Missing in Frankfurt: Search for girls (13) leads police to Giessen

Covid long-term consequence fatigue: “They are people under 60, not the...