BERLIN (Dow Jones) – The corona crisis has put electricity wholesale prices under considerable pressure, according to experts. In 2020, the average wholesale price of 30.47 euros per megawatt hour was more than 7 euros below the previous year’s value, announced the Energy Science Institute at the University of Cologne (EWI). The reasons were lower fuel costs, lower electricity demand and more electricity from renewable energies.

According to EWI, the national corona restrictions and the global recession caused electricity demand in Germany to fall by almost 16 terawatt hours (3.2 percent). Demand collapsed during the first lockdown in April, but remained low beyond that. Only in August did it return to the previous year’s level. The effects of the lockdown in November and December, however, were only minor.

According to the brief analysis, prices for coal and gas also fell as a result of the pandemic. Gas prices came under pressure in 2019 due to the large supply and reached new lows in 2020. The price for CO2 certificates also collapsed as a result of the European lockdown measures in the spring, but remained stable on average for the year due to the rapid recovery.

The lower fuel prices reduced the marginal costs of the power plants and thus their operational sequence on Electricity market. “Combined gas and steam power plants have benefited from low gas prices and were even able to move ahead of lignite power plants in the order in which they were used,” explains EWI manager Simon Schulte. At the same time, green electricity generation has increased by 9.2 terawatt hours. The expansion and favorable weather conditions ensured an increase in wind energy on land (3.5 percent), at sea (11.1 percent) and in solar energy (9.3 percent).

S-Bahns are back on schedule – traffic situation

Crisis of the century costs three years of economic output –... 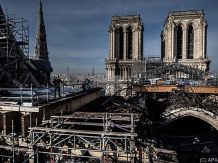