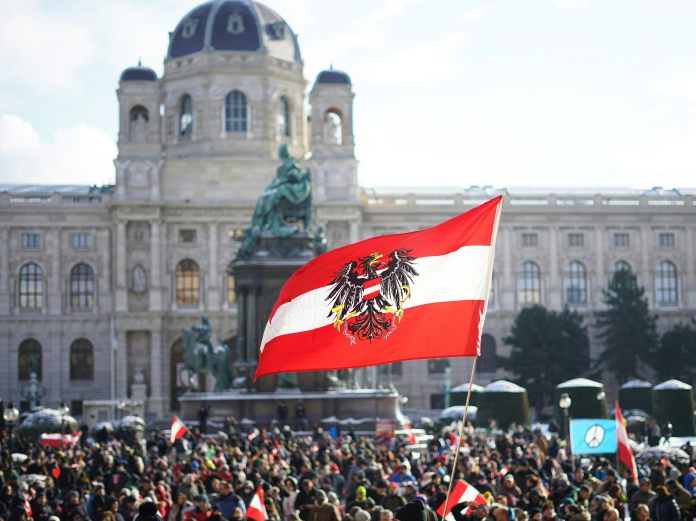 
More than 10,000 people demonstrated at several locations in Vienna on Saturday.
© WHAT / GEORG HOCHMUTH

Between 10,000 and 50,000 people demonstrated yesterday against the corona measures in Vienna, including recognized right-wing extremists and neo-Nazis. Counteractivists partially blocked the ring and caused a riot.

The  march of opponents of the Corona measures in Vienna began peacefully on Saturday, but then there were tumults, almost clashes with counter-demonstrators and attacks against media representatives. Police reported 20 arrests and more than 300 complaints. According to the police, a little more than 10,000 marched against the corona measures, according to the organizers more than 50,000.

The resien-Platz, another 3,000, according to Dittrich, on Heldenplatz. As expected in advance, the right-wing extremist scene was also very popular. At around 2.30 p.m., the two groups gathered on the ring.

The  manifestants were not really interested in compliance with the Covid-19 Measures Act, mouth and nose protection was hardly to be seen, even with ex-FPÖ chairman Heinz-Christian Strache, at least temporarily. Distance rules were also not observed. After criticism in social networks, the police tweeted: “Numerous identifications have already been made because of disregard of the COVID requirements. Those affected are of course also reported.”

The  non-compliance with the measures was not surprising: During the opening speeches at Maria-

The resien-Platz, a spokeswoman had already spoken roughly against the obligation to wear mouth and nose protection and to keep your distance: “Throw the dirty scraps (meant : Mask, note) finally gone, “she urged the demonstrators. Note: Numerous studies have already examined the effectiveness of masks. An overarching analysis of several studies published in June 2020 in the journal “

The  Lancet” finally came to the conclusion that a mask measurably reduces the risk of infection. Johannes Knobloch, Head of Hospital Hygiene at the University Medical Center Hamburg-Eppendorf, explained last October: “We know that a mask keeps droplets away and reduces the transmission of aerosols. Thus, the number of droplet infections through a mask should be significantly reduced, the transmission of Aerosols too in many situations. “

The  initially peaceful march across the ring against the direction of travel escalated at the level of the Stubentor: A group of around 15, 20 counter-demonstrators sat on the roadway and blocked the march. “We vaccinate you all,” they hurled at the anti-corona activists. Football hooligans attempted to attack them, but the police separated the two groups.

The  hooligans directed their aggression at media representatives. An APA cameraman reported that the activists harassed and threatened him.

The  freelance journalist Michael Bonvalot wrote on Twitter that a photographer had been hit and kicked, and that he himself was threatened.


Conspiracy theories were also given to pray for.
© APA / ROLAND SCHLAGER

The  police finally lifted the blockade and established the identities of the activists.

The  march of the anti-corona activists continued and reached Heldenplatz again around 5.30 p.m., where the rally ended after a short time and the activists initially moved on to Maria-

The re the meeting continued with a few speeches until around 6:30 p.m.

Neo-Nazis carted on with buses

The  APA also learned from police circles that the neo-Nazi Gottfried Küssel, who had been convicted several times, was at the demonstration with two buses full of like-minded people from the Oberwart area and old comrades-in-arms from the times of the forbidden people-loyal extra-parliamentary opposition (VAPO) from the Langenlois area. According to intelligence agencies, there are strong indications that Küssel wants to rally cadres from VAPO times again.

The  VAPO was a militant neo-Nazi group founded in 1986, which, according to the documentation archive of the Austrian Resistance, was never constituted as a party or association. Küssel was its chairman, and VAPO was broken up in the mid-1990s.

Around 1 p.m., a counter demonstration started at the Stephansplatz-Graben corner. According to police spokesman Markus Dittrich, there were initially around 150 to 200 manifestants from the left-wing spectrum from VSStÖ and socialist youth to anti-fascist organizations who took part.

The  demo is directed against the “madness that is taking place today at Heldenplatz,” said one speaker.

On banners, the counter-activists not only critically dealt with the anti-corona protests, but also with the government’s crisis policy, which, in their opinion, is too slow. At 2.30 p.m. there was the final rally of this march, which ultimately had around 500 demonstrators, on Ballhausplatz. From the ranks of these activists, some manifestants may have come together, who may have been responsible for the blockade and individual further disruptive actions.

Only 156 reports due to missing face mask

Late in the evening, the Viennese police took stock of the demos: According to them, there were three arrests for attempted resistance against the state authority, one each at the city park – this concerned a participant in the sit-down -, at the outer castle gate and at the state police headquarters on Schottenring. Another 17 arrests were made under administrative law, for example because the identity could not be determined or because of aggressive behavior.

In addition, there were 14 reports of criminal offenses and 296 reports of an administrative nature. 156 of them related to the Covid 19 Measures Act.

The re were also seven board mandates under the Covid 19 Measures Act and 242 identity determinations. In a broadcast by the executive it was said that a large number of those attending the meeting had not worn mouth and nose protection. “For reasons of the principle of proportionality and the necessities of police tactics, the large-scale demonstration was not broken up, but reports were made,” emphasized the executive.

Start of AR with these manufacturers

“Job advertisements back to pre-crisis level”