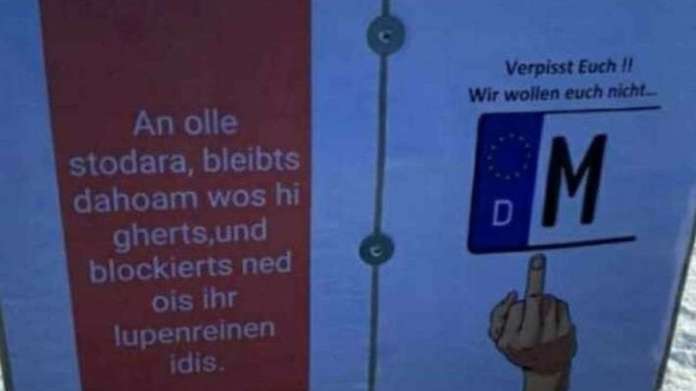 Whether tobogganing, skiing or hiking: Despite the Corona warning, many Munich residents are drawn from the city to the mountains. Some residents are anything but enthusiastic about it.

Update from January 3, 2021: Miesbach – where on nice days the Excursion traffic jams, strangers had a large format shortly before the turn of the year sign placed. It shows you Finger under a Munich license plate, above the sentence “ We don’t want you” and a printout that is not ready for printing. In addition, the crude request: “ Stay there, where it’s high”.

The –police quickly collected the sign with the foul inscription. Shortly before the turn of the year, on Thursday, December 31, around noon, officers from the Miesbach police station removed the sign from his Location am Roundabout at the entrance to Miesbach. Up until then it had been photographed umpteen times. Via Facebook, Instagram and What‘sApp spread that Hate sign like a wildfire.

Hospitality in the Oberland 🤔🙈 ( Not my photo) miesbach pic.twitter.com/SF1SYzHlqt

Hundreds of comments were written in a flash. They range from Outrage to approval, the emotions boil. It is the preliminary one Climax a development that started with the first Lockdown has started and the formation of fronts continues to sharpen. “But you cannot master the situation, which is certainly difficult,” warns Miesbach’s mayor, Gerhard Braunmiller.

The – Shield action is “in no way acceptable” for him. He appeals to reason, says the mayor. It is important to show consideration for one another. And he understand that it is Those seeking relaxation into the mountains and into the snow. He wanted the public order office to remove the sign. But there it was already in the courtyard of the local police.

It is not yet known who put it at the roundabout. According to the police, it is already arriving Criminal proceedings against unknown. On the one hand, because it is generally not allowed to put a sign on the street without a permit. On the other hand, because of the offensive content of the message. “ This is how you stir up hatred”says a police spokesman.

The -public prosecutor’s office is examining the operation Search for the authors run.

Mayor and district council appalled at message of hate to all Munich residents: “ This is how you stir up hatred”

Not only in Miesbach does that Hate message to all Munich residents for riot. Josef Bogner, chairman of the Rottacher Verkehrsverein and FW district councilor, made his outrage in one yesterday, Sunday opinion Air. He was appalled by the “now achieved extent of the Hostilities in our district towards day guests and their families in Coronazeiten“, Explains Bogner and is astonished by positive online comments about the Schild-Aktion:” What kind of society are we if we approve of something like that? “

Such “welcome tables”, according to the innkeeper, are not just one Insult to the day guests, but for everyone who wants to work together in Tourism business have built. He himself still has to deal with guests on a daily basis, reports Bogner. They wanted, “as we do”, in the nature and above all to offer their children a reasonably normal life. “Everything else is difficult enough anyway. School at home, no kindergarten, home office, short-time work – and that’s why people are worried, “says Bogner.

And as always, most citizens obeyed all regulations, in this case the Hygiene regulations. “You don’t have to go through the whole region because of a few individual idiots „M“ put under ‘stinky fingers’ ”, the Rottacher warns. After all, the district has been living quite well from its guests for decades. Incidentally, there are citizens who all the rules in the Corona time ignore, even in the district enough: “ Unfortunately.”

The – Hate message had already disappeared, as a stranger in the same place a warm one Counteroffensive placed. A wooden heart with the inscription: “ Community counts … no exclusion.”

The -heart greeted locals and day-trippers until Sunday noon. Then the Miesbach police removed this sign as well. Because it is not allowed Posters or the like simply to be placed on the street – even if the Embassy fits.

Whirl around the rush of visitors in the Oberland: Sign with hate message appeared – a clear indication for Munich residents

First report from January 2, 2021: Miesbach – It couldn’t be clearer: A huge middle finger adorns the self-made sign at the entrance to the village Miesbach, Upper Bavaria. Above that a license plate of the city Munich and a clear appeal: “ To olle stodara, stay there wos hi gherts, and blocks ned ois you flawless idis. “ For all Munich residents without knowledge of Bavarian there is still a high German:” Fuck off! We don’t want you …” after.

The -trigger: Despite exit restrictions, numerous day-trippers are currently overrunning the Alpine region *, including in the Miesbach district. Already sent during the holidays District Administrator Olaf von Löwis That’s why a desperate SMS to Prime Minister Markus Söder *: “Dear Markus, I don’t like to annoy you by SMS,” wrote Löwis, “But it doesn’t work out for us Day tourism out. It really burns. ”#Among other things, there were concerns police and Regulatory authorities. Many day trippers do not even think about adhering to the corona protective measures *.

The -eternal hatred of Munich: does Corona make everything worse? – Hostile visitors to the Oberland

Many residents are particularly popular Excursion destinations as Miesbach Not good on that anyway Munich visit to speak. Wanderer, Tobogganers and skier clog the roads every year and cause miles of traffic jams, numerous accidents and garbage. With Corona the problem seems to multiply: Accident victim* threaten in the already overcrowded Emergency rooms to land and because of the restrictions not even everyone benefits Liftbetreiber or Restaurants from the unwanted rush of visitors.

For some, this seems to lead to a real one Munich hatred. Signs have already been put up, visitors with a Munich license plate insulted *. In Garmisch-Partenkirchen, a new citizen even reports that he has been attacked solely because of his license plate number *.

Hospitality in the Oberland 🤔🙈 ( Not my photo) miesbach pic.twitter.com/SF1SYzHlqt

Extreme reactionsthat probably also applies to the general discontent the population in the current situation.

On the Shield placed in Miesbach many react in exasperation. A Twitter user comments: “And never go to Munich to go shopping … this divisive attitude is annoying.“It is clear, only one on both sides respectful behavior can perhaps end the eternal dispute at some point, in any case this also includes observing the corona protective measures * – so behave yourself! (vs) * Merkur.de is part of the Ippen-Digital network.

According to epidemiologists, new measures will probably not be enough

Bring on the aggressiveness: The opening debacle has consequences for women...

Current developments in the corona crisis: Over 50,000 dead in Germany

Study from England: These corona symptoms are dangerous