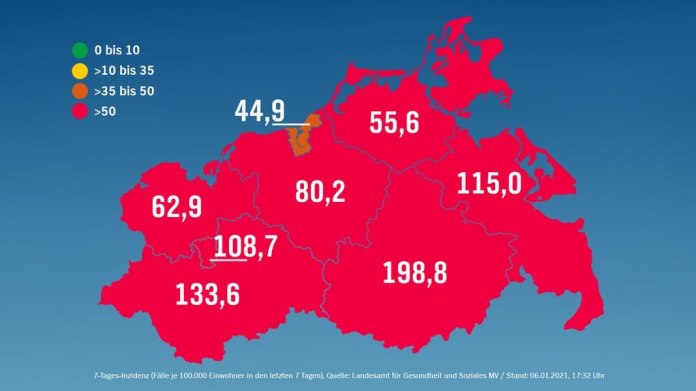 The number of registered new corona infections has increased by 481 cases in Mecklenburg-Western Pomerania since Tuesday (as of Wednesday 5:32 p.m.). A total of 13,710 infections have been reported to the State Office for Health and Social Affairs (LAGuS) in the country since March. According to an estimate by the Robert Koch Institute (RKI), 10,448 (+289) of the people who tested positive in Mecklenburg-Western Pomerania have recovered from Covid 19 disease. The number of deaths in the northeast rose by 15 to a total of 215.

Nationwide, the incidence value rose from 96.4 to 103.3 infections per 100,000 inhabitants within a week. This means that Mecklenburg-Western Pomerania, as a federal state, continues to be a risk area. Three districts and Schwerin exceed the incidence value of 100. In the Mecklenburg Lake District the value is 198.8, in Ludwigslust-Parchim district 133.6, in Western Pomerania-Greifswald 115 and Schwerin 108.7. The Rostock district reports a seven-day incidence of 80.2. For the district of Northwest Mecklenburg the value is currently 62.9, in the district of Vorpommern-Rügen it is 55.6 and in the Hanseatic city of Rostock it is 44.9.

Currently 315 people with Covid-19 in hospital

According to the latest figures from the LAGuS and the Ministry of Health, 315 (+3) people are currently being treated in a hospital for Covid-19 disease, 87 (-2) of them are in intensive care. According to the intensive care register, 40 (+1) Covid-19 patients must be ventilated. The registry shows 539 occupied and 122 free intensive care beds for Mecklenburg-Western Pomerania (as of Wednesday, 5:19 p.m.).

162 new cases in the lake district

According to the LAGuS, most of the infected people were or still are in the Mecklenburg Lake District with 3,137 (+162) infections so far. In the Vorpommern-Greifswald district there are a total of 2,645 (+35) cases. So far there have been 2,082 (+87) infections in the Ludwigslust-Parchim district. 1,365 (+42) infections were reported in the Vorpommern-Rügen district. The LAGuS reports 1,314 (+20) cases for the district of Northwest Mecklenburg. In the Rostock district, the authorities registered 1,161 (+82) people who were verifiably infected with the corona virus. The lowest total numbers are found in the Hanseatic city of Rostock with 990 (+33) and the state capital Schwerin with 1,016 (+20) cases.

Minister of Social Affairs Drese asks parents to only bring their children to daycare when there is no way to look after them at home. more

After the announcement of the extended lockdown, the retail and tourism industries are concerned. more

In a nursing home in Lübz, more than 100 residents and employees are now infected. Other institutions also report high numbers. more

Everyone over the age of 60 could get free FFP2 protective masks by Wednesday. Authorization certificates are now required. more

Helene Fischer: The reunion with little Sontje was so touching –...

Joachim Gauck: “The AfD cannot suck honey out of its attacks”

Heidi Klum: 3 generations in one photo: She poses with daughter...

Now live: Federal Council is no longer ruling out a second...

Coronavirus in the capital: “Learning space Berlin” cannot be reached one... 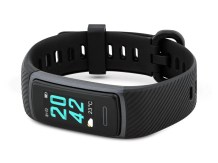 Fitness tracker at a bargain price and a massive smartwatch