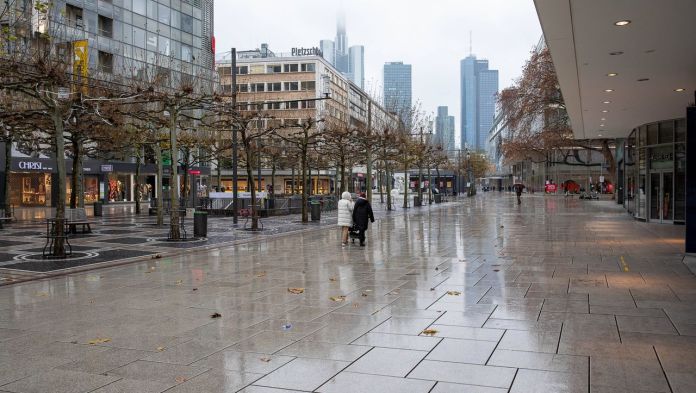 Shortly before the deliberations between Chancellor Angela Merkel and the Prime Ministers, several countries are signaling that they consider an extension of the current shutdown to be inevitable. So far, the measures, including the closure of shops and schools, are limited to January 10.

The -Rhineland-Palatinate Prime Minister Malu Dreyer (SPD) spoke out in favor of an extension until the end of the month. “I am of the opinion that we definitely have to extend it until the end of January,” Dreyer told the SWR. According to her, “the majority of colleagues” in the other countries shared this assessment.

The -dpa news agency reported on Monday that almost all federal states were in favor of extending the shutdown. There has been no confirmation of this so far.

The -federal government is also in favor of an extension by the end of January.

“ Unfortunately, we don’t yet have the numbers we need,” said Dreyer, referring to the development of corona infections. After the Christmas holidays and the turn of the year, there is currently little clarity about the actual development. “ At the moment, we cannot really assess what the situation is like, also because fewer tests have been carried out and fewer doctors have been open.”

Dreyer told the SWR that there had to be “very clear proposals” by the end of the month as to how things should continue in February. “ You have to come back to a more public life step by step.” It is inconceivable “that we will remain in such a shutdown situation permanently.”

The -vaccination campaign that has now started gives hope. She wishes “that we will have more vaccine in the future so that we can go even harder.”

Bavaria’s Prime Minister Markus Söder (CSU), Saxony’s Prime Minister Michael Kretschmer (CDU) and Thuringia’s Prime Minister Bodo Ramelow (left) had already called for a shutdown extension until the end of January at the weekend. Your federal states are severely affected by the second wave of infections. “ Premature loosening would throw us back a long way,” said Söder of “ Bild am Sonntag”. It wasn’t until mid-January that we really knew how Christmas and New Year’s Eve would have affected the number of infections. “ We have to be consistent and not give up too soon.”

Kretschmer warned on Monday of a “yo-yo effect” if the current measures were to be loosened too quickly. All those countries that tried this would then fall back into lockdown, said Kretschmer in the ARD »#Morgenmagazin«. This “yo-yo effect” is “much worse than if we keep our cool for a while, stay consistent and try to reduce the numbers further.”

With parents and teachers, but also with the kindergartens, it was necessary to talk about the fact that the facilities would have to remain closed for a certain time in order to further reduce the activity. “ Open shops, open schools mean so much movement, so many opportunities to infect one another without even realizing it.”

The -corona requirements could be relaxed when the hospitals had fewer patients again and the health authorities managed to reliably track contacts, said Kretschmer.

The -aim is to quickly quarantine people who have tested positive and their contacts so that the chains of infection are broken.

Kretschmer expressed concern about the situation of medium-sized companies. Therefore, at the federal-state meeting on Tuesday, economic aid for those who cannot yet open their shops should be discussed.

The -federal and state governments should not take any further risks, especially with regard to virus variant B.1.1.7 with its increased risk of infection, Hans told the newspapers of the Funke media group.

The -virus mutation discovered in Great Britain was also detected in Germany at the end of last year. According to scientists, it is significantly more contagious than the previously known version.

“ Our hospitals are at the limit of their resilience, and without an extension of the lockdown we cannot get the situation under permanent control,” said Hans. In order to prevent a third corona wave, a “hard lockdown” must be adhered to. “A hasty relaxation can throw us back in the fight against the pandemic, that is the painful lesson from the experiences of the past year.”

In order to keep the infection rate as low as possible everywhere, regular operation at schools and daycare centers in January is hardly conceivable in the current situation. Only Baden-Württemberg’s Minister of Education, Susanne Eisenmann (CDU), had recently made an offensive plea for a quick resumption of face-to-face teaching.

Hundreds of people gather in Erfurt despite the ban on demonstrations

Berlin Senate wants to open hotels to people in quarantine