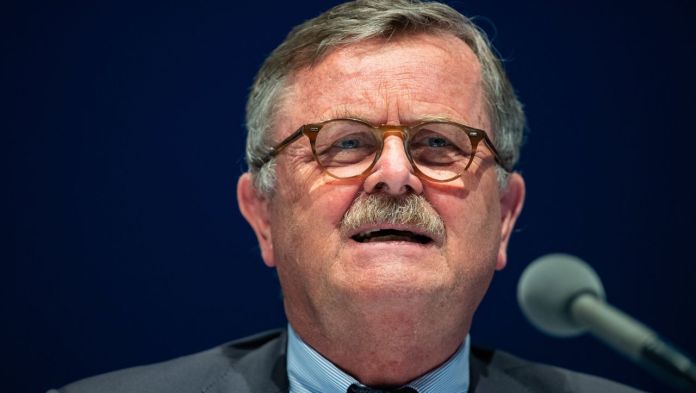 The  chairman of the World Medical Association, Frank Ulrich Montgomery, has spoken out in favor of fines for companies that refuse to use the home office more in the corona pandemic.
“If companies become sources of infection and social costs arise as a result, although this could be avoided by more home office in the company, then fines are also required for companies,” said Montgomery of the “Saarbrücker Zeitung”.

This should “not be a taboo,” stressed Montgomery. Despite the lockdown, there are still too many personal contacts and too much mobility. In the professional field, this means “everything that can be relocated to the home office”.

In addition, the hygiene concepts in the companies would have to be checked again for their effectiveness. “It is of little use to sit alone in the office, but at lunchtime in the canteen among many colleagues,” warned the association chairman. He also believes that a reduction in contact is justified “at the price of the temporary shutdown of individual production areas” if this is necessary to contain the pandemic.

The  federal government, however, wants to continue to rely on voluntariness. “Mandatory regulations are not currently on the agenda,” said government spokesman Steffen Seibert on Friday in Berlin. Instead of fines, the government continues to rely on appeals.

The  proportion of people who worked from home was significantly higher in the spring than it is now,” said Seibert. He hoped that the realization would come that employees and employers would have to agree on more home offices again.

The re should also be no home office obligation for the individual federal ministries; staying at home would be negotiated “with mutual consideration”.

Last week, Montgomery campaigned for mandatory vaccination: “For nurses and medical staff, job-specific mandatory vaccination against corona makes sense,” he told the newspapers of the Funke media group. “Anyone who deals with vulnerable groups has to be immunized” – either through having survived Covid 19 disease or through a vaccination. In the long run, however, there is a need for general vaccination.

The  President of the German Medical Association, Klaus Reinhardt, refused.

Bärbel Bas was open to the arrangement of a home office obligation for areas in which this can be implemented. “

The  home office must now be made possible wherever possible,” said the SPD parliamentary group vice-chief. In other countries there is already an obligation to work from home, “we have to discuss this,” she said in the newspapers of the editorial network Germany (RND) on Saturday.

In general, it is important to »further reduce contacts, even if it’s difficult,« demanded Bas. She referred to the risk of virus mutations spreading and thus further increasing numbers of infections. “

The  number of new infections and corona-related deaths is still much too high,” said Bas for additional protective measures.

The  SPD health expert Karl Lauterbach called for stricter rules for companies to protect against the pandemic in the “Passauer Neue Presse”.

In view of the infection situation, clearer home office rules also meet with approval from the population. A majority of Germans are in favor of an obligation to work from home. This is the result of a representative survey conducted by the opinion research institute Civey among more than 5000 participants for SPIEGEL. According to this, 56 percent of those surveyed are in favor of a general ban on working in the office if home office is possible, 32 percent against.

Health – Stuttgart – So far hardly any flu cases in...

Rush despite lockdown: Austrians are pushing the slopes

Corona vaccination: can the second dose be postponed? – Extension...