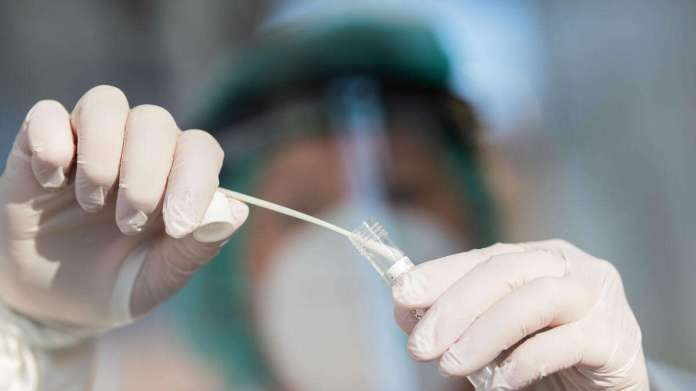 For the first time, a study from Great Britain provides a clear figure on the risk of infection with the new Corona variant. Do lockdown measures now have to be reconsidered?

London – The new one Coronavirus-variants had already caused a political stir at the end of 2020. Airplanes were not allowed to land, trucks jammed and people spent the night at the airport. They will also play in 2021 Mutations at Lockdown-Decisions and other strategies matter.

Corona mutations: New numbers on the virus variant from England

The fact that mutations occur is nothing new. Of the Variant B 1.1.7 It was said, however, that it was significantly more contagious than the original variant, although not necessarily more dangerous or deadly. Experts repeatedly emphasized: “We have to wait for further investigations.”

A new study out Great Britain is now running figures – and initially confirms the previous assumption. The new variant should be significantly more contagious. The R-value is increased by 0.4 to 0.7. That is crucial because the Reproduction number should stay below one so that the spread of the coronavirus is contained.

➡️VOC growing rapidly
➡️Transmission advantage for VOC of 0.4 to 0.7 difference in reproduction number compared to non-VOC variant
➡️VOC affecting a greater proportion of under 20s

“There’s a big difference in how easy this is variant spread, ”Axel Gandy of Imperial College London, who contributed to the study, told BBC News. “This is the most serious change of the virus since the epidemic began, ”he added.

Study on Corona variant B 1.1.7: Apparently all age groups are affected

Earlier assessments assumed that the altered virus is particularly bad Children spreads quickly. However, the latest data suggested that all Age groups could be affected. “One possible explanation is that the early data was collected during the November lockdown when schools were open and adult population activity was more restricted. We now see that the new virus is the Infectivity has increased in all age groups, ”said Gandy.

These results could have serious implications for further action Pandemic Fight to have. “If we do nothing else, the new strain of the virus will continue to spread, there will be more infections, more hospitalizations and more deaths,” said Jim Naismith of Oxford University against the BBC. He also pointed out that the November lockdown in England did not stop the spread of the new variant of the study.

Corona lockdown in Germany: extension also for fear of mutations?

It is likely that the variant will soon also be available in Germany Will be dominant, said the virologist Jörg Timm from the University Clinic Düsseldorf of the German press agency. “I think a reduction in the number of cases is fundamentally necessary for sustainable infection control. When the data increases Contagiousness of the new variant are correct – and I am assuming – then the task will certainly be more difficult. “

All hope remains on that Corona vaccine. In the UK, the first man was vaccinated with the newly approved AstraZeneca drug on Monday. In Germany, too, more and more people are being immunized, but political discussions about the vaccine are ongoing. Manufacturer Biontech so far assumes that his remedy also works against the mutations. Further investigations are to follow.

In addition, another variant in South Africa discovered. British Minister of Health Matt Hancock was also quite concerned about this variant on Monday. “That is why we have taken the measures we have taken to restrict all flights from South Africa,” he told BBC Radio. “This is a very, very important problem (…) and it is even more of a problem than the new British variant.” Studies and investigations follow in order to better assess the risk.

Corona mutation and the consequences: Germany could take tough measures

Before the Corona summit on Tuesday, the signs are for an extension. The federal and state governments should “not take any further risks, especially with regard to the new virus mutation B 1.1.7 with its increased risk of infection,” said Tobias Hans (CDU), Prime Minister of Saarland, the newspapers of Funke media group.

In his controversial statement about an indefinite lockdown also took Karl Lauterbach (SPD) towards the Passauer Neue Presse focus on the risk of mutations: “We have to reduce the number of new infections more significantly than previously planned. An incidence value of 50 is not enough, because in the future we will probably have to deal with a virus variant that is much more contagious than the one that was previously widespread in Germany. “(food)

Hard but fair (ARD): Plasberg rages, Lauterbach gets it: “That someone...

Mockery and scorn after the British flee: “Is there a reward...

Let’s Dance 2021: The 14 celebrity participants in the check