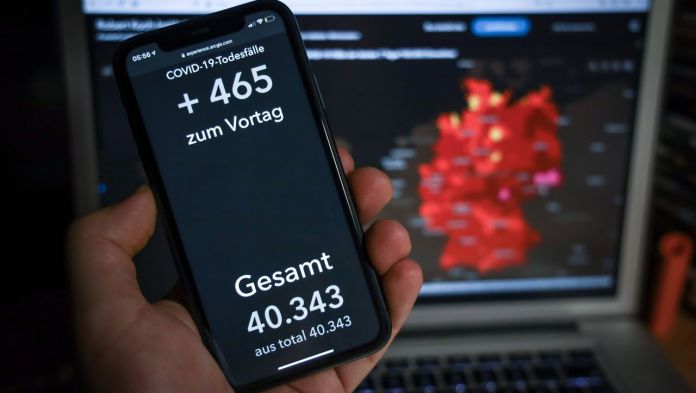 This article is continuously updated.

Don’t miss anything: subscribe to our for the latest developments and the most important background information Coronavirus-Newsletter.

11.08 a.m .: Cuba wants to test part of its corona vaccine “Soberana 02” in Iran. Representatives of both countries signed a corresponding agreement in Havana, as the Cuban Foreign Ministry announced on Saturday. The vaccine is now to be tested on a larger number of people in Phase III of clinical trials. So far, relatively few people in Cuba have been infected with the Sars-CoV-2 virus, which makes it difficult to check the effectiveness of a vaccine. Iran, on the other hand, ranks 15th worldwide with almost 1.3 million detected infections.

In addition, Iran’s top leader recently banned the import of vaccines from the USA or Great Britain. Iran must not become a testing laboratory for unsafe vaccines, said Iran’s top leader, Ayatollah Khamenei. (Read more about this under the entry from 9.55 a.m.). The background to the ban could be the more than 40 years of political hostility between Iran and the USA. Iran prefers to forego American productions as much as possible.

Cuba too has been hostile to the United States for decades. “Cuba and Iran are resisting the cruel and inhuman sanctions of the US government, which were tightened again in times of the Covid-19 pandemic – in total contradiction to the spirit of cooperation and respect for the right to life of our peoples,” said it Cuban Foreign Ministry with.

More than 22 million infections in the US

10:57 a.m .: In the United States, over 22 million people have contracted the coronavirus since the pandemic began. On Saturday, 269,623 new infections and 3,656 deaths with a confirmed coronavirus infection were recorded within one day, according to data from the Johns Hopkins University (JHU) on Sunday.

Since the pandemic began, more than 372,500 people have died from the Sars-CoV-2 pathogen in the United States. In absolute terms, that’s more than in any other country in the world.

Most cases of infection have so far occurred in California in the Los Angeles district, which also includes the metropolis of the same name. According to the JHU, over 889,000 people there were infected with the virus, and more than 11,800 died after being infected.

Greens against online sessions of the Bundestag – Parliament able to work

10:42 am: The Greens in the Bundestag reject pure online parliamentary sessions because of the corona pandemic. “The Bundestag is functional, even in times of crisis. Moving away from the presence of MEPs would completely change the character of our Parliament. That can’t be wanted, «said the first parliamentary managing director Britta Haßelmann of the news agency dpa in Berlin. She responded to a push from the ranks of the Union faction to allow the Bundestag to meet only digitally for the time being because of the high number of infections.

“Especially in these pandemic times, public discourse, the struggle for good concepts and the weighing of decisions are urgently needed. Measures, restrictions and vaccination strategies must be discussed and advised transparently, «said Haßelmann. One will have to discuss the modernization and digitization of everyday work processes in the Bundestag. Regarding the exercise of a mandate without attendance, there are serious constitutional concerns and risks in the implementation, said the Green MP. »In the last few months of the corona crisis, Parliament has shown that it is able to work. Changed rules of procedure, greater distance between the members in the plenary hall, the use of masks in the houses, hybrid committee meetings and digital committee meetings show that it is possible. ”

The Bremen CDU MP Elisabeth Motschmann had previously told the dpa: »Under the current Corona measures, the German Bundestag should also draw conclusions and not meet physically. Over 700 members of the German Bundestag from all over the Republic travel to Berlin every week of the session. Who is responsible for that? “

10:39 a.m .: Be brief – the old telephone rule no longer applies in the pandemic. Statistics show that phone calls lasted longer on average in 2020 than in previous years. Read more here.

Swiss exile for the rich: Corona luxury winter for 55,555 francs

10:36 a.m .: While life in the rest of Europe stands still, the Engadin continues to offer wealthy guests from all over the world luxurious winter tourism – despite the dramatically high number of new infections. Read the whole text here:

10:29 am: In Belgium, the number of corona deaths has exceeded the 20,000 mark. More than half of the people who died lived in old people’s homes, the authorities announced on Sunday. The country, with a population of 11.5 million, has reported 662,694 infections and 20,038 deaths since the pandemic began.

According to this, 10,270 people had died in old people’s homes by mid-December. All deceased with a positive corona test are counted as virus deaths in Belgium. In the past week, the average number of reported deaths was 58 per day and about 1,780 infections daily. Belgium started vaccinations against the virus on January 5th.

09.55 a.m .: The US online service Twitter has removed a post by Iran’s spiritual leader Ayatollah Ali Khamenei in which he described corona vaccines from the USA and Great Britain as “untrustworthy”. The Khameneis tweet violated the company’s guidelines for handling false information about the corona pandemic and was therefore deleted, a Twitter spokesman said on Saturday.

Khamenei had written on his English-speaking Twitter account that the import of corona vaccines from the United States and Great Britain was “prohibited” because they were “completely untrustworthy”. It is “not unlikely” that the two countries “wanted to poison other nations,” he continued. “Given our experience with HIV-contaminated blood donations, French vaccines are also not trustworthy.”

In his last comment, Khamenei referred to a blood donation scandal in France in the 1980s, in the course of which blood donations contaminated with the HIV virus were delivered to French and foreign clinics.

Khamenei’s Twitter channel is managed from his office. Quotes from his sermons are usually published there. In Iran, Twitter is officially banned, even though several government officials, including President Hassan Ruhani and Foreign Minister Mohammed Jawad Sarif, make extensive use of the online service. In December, he announced tougher action against false information and misleading information about the corona pandemic.

Israel has already vaccinated 20 percent of its citizens against Corona

09:52 a.m .: Three weeks after the start of the vaccination campaign in Israel, 20 percent of citizens have already been vaccinated against the coronavirus. Health Minister Juli Edelstein announced on Twitter on Sunday that around 1.8 million Israelis had received the first dose of vaccine. In total, the small Mediterranean country has more than nine million inhabitants.

On Sunday, vaccination of the medical staff began with the second dose. Israel’s Prime Minister Benjamin Netanyahu also received his second vaccination on Saturday evening. The government wants to vaccinate all residents of the country who are older than 16 years by the end of March.

According to media reports, Israel has signed an agreement with the manufacturer Pfizer to make this possible. In total, Israel should receive ten million doses of the Pfizer Biontech vaccine. Israel will be the first country to leave the corona crisis behind, Netanyahu said on Thursday. It should serve as a model country for the rapid vaccination of an entire state. In return, vaccination data should be made available to the company.

Israel is currently in the third corona lockdown because the number of infections rose significantly again at the end of the year. The Ministry of Health announced on Sunday that 5030 new cases had been reported within 24 hours. For comparison: The German health authorities reported 16,946 new corona infections within one day on Sunday. Germany has about nine times more inhabitants than Israel.

Michael Wendler: “DSDS” star makes a song about Wendler – the...

German rock greats dead: His band is legendary – “His health...

LaLiga: Real Madrid can’t get past a draw