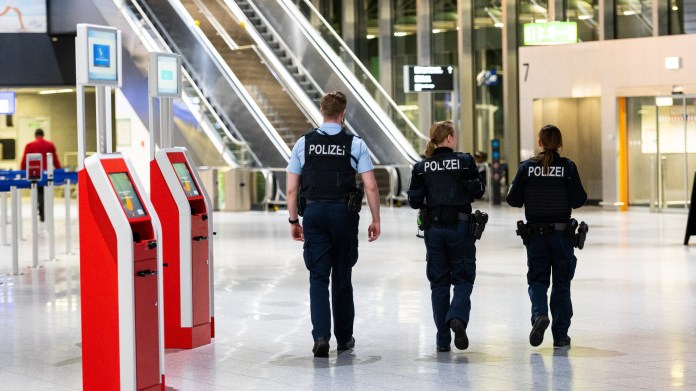 From today on, the federal police at Frankfurt Airport will intensify controls on flights from high-risk areas. Above all, the entry registrations and evidence of a current, negative corona test are checked.

As of today, the federal police are tightening controls at Frankfurt Airport to prevent the coronavirus from spreading further. In particular, flights from 32 so-called high-risk areas are “consistently controlled”, said the federal police.

Directly at the aircraft and before the actual border control, a check is made to see whether the passengers could present a current, negative corona test and have filled in the entry forms. In Frankfurt today, 17 flights from five countries are expected to be affected. According to the federal police, all measures are being carried out in close coordination with the health authorities, the Hesse state police, the airport operator and the airlines concerned.

According to information from the “Spiegel”, the Federal Police are also mobilizing significantly more officers at Munich Airport in order to be able to check all landing passengers.

According to the federal police, the additional measures are intended to identify travelers who must be sent to quarantine immediately.

The  federal government had previously classified significantly more countries than before as high-risk areas to protect against the introduction of new corona cases to Germany. What is particularly new is the listing of countries in which the so-called 7-day incidence is over 200 new infections per 100,000 inhabitants and week (Germany currently: 115).

The  exact countries of origin affected by the orders can be found on the website of the Robert Koch Institute (RKI).

The  category that will apply from today includes Spain, Portugal, the USA, the Czech Republic, Slovenia, Bosnia and Herzegovina, Serbia, Montenegro, Kosovo, North Macedonia and Egypt. Anyone wishing to enter from there must be able to show a negative corona test (PCR test) at the border.

All travelers from these countries must do a corona test before they leave for Germany and are only allowed to enter Germany with proof of a current negative result. According to the Federal Ministry of the Interior, the tests are systematically checked at the airports and seaports. At the land borders with other EU countries where there are no border controls, travelers should be checked randomly and independently of suspicion.

After the Czech Republic was classified as a high-risk area, Saxony reacted with a special regulation for incoming commuters: the state issued exemptions from the stricter test requirement for cross-border commuters. According to a general decree, people who travel to Saxony to work only have to be tested for the corona virus twice a week.

The  test is also only possible after entry, but must be done before work begins. For the exception, those affected must be able to present a valid employment contract upon entry.

The  reason for the move was that many people from the Czech Republic work in Saxony – according to the State Chancellery, more than 10,000. This is to ensure the “functionality” of the businesses in the border region.

“There is little that we can still close”

CES 2021: This is how the gadget year begins