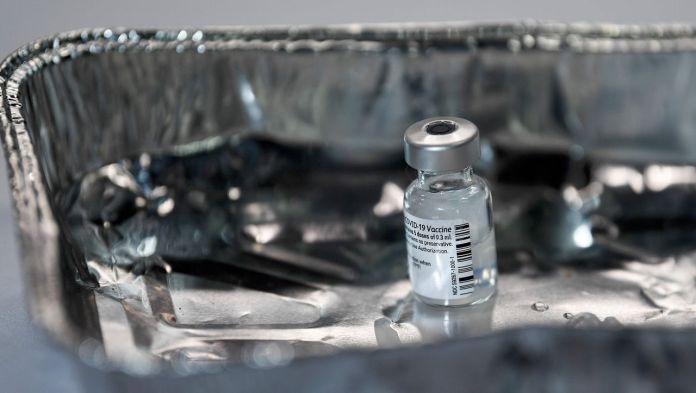 A new, more contagious virus variant is spreading, the vaccines are scarce, and the production is probably not keeping up with the gigantic demand for months. In these conditions, how can the vaccine doses available best help protect people from a potentially fatal disease?
What reads like an exercise in health care is currently a reality: While the apparently more contagious coronavirus variant B.1.1.7 is spreading, vaccination programs in European countries are only picking up speed very slowly.

Under these circumstances, Great Britain has decided to take an unusual step: people should not receive the second vaccination dose of the Biontech / Pfizer and Astrazeneca products approved there around three weeks after the first dose, but up to twelve weeks later.

“ Prioritizing the first dose of vaccine for as many people as possible protects the greatest number of people in the shortest possible time and therefore has the greatest impact on preventing deaths, serious illnesses and hospital admissions,” writes the British health service NHS. “ In practice this means that the second vaccine dose is given at the end of the recommended vaccination schedule of up to twelve weeks.”

So the idea is: Better to protect as many people as possible to some extent than optimally a smaller number – to prevent as much suffering as possible. However, it cannot be predicted whether it will work out.

Manufacturer Pfizer warned that the phase III study looked at how effective the vaccination is after two doses given three weeks apart. The investigation shows that a certain protection builds up in some cases as early as twelve days after the first vaccination. But it does not provide any data beyond a period of 21 days – because then the second vaccination took place in the study.

The decision is therefore made in the absence of secure information. Even if there are currently some figures circulating about how well a single dose of vaccine supposedly protects: Nobody knows today exactly whether these values ​​are still correct after two, three or six months. That can only be found out through studies.

“ No significant compromises in effect to be expected”

Nevertheless, some scholars consider the British approach to be sensible in the current situation. For example, the vaccine researcher Leif-Erik Sander from the Berlin Charité said, according to the Science Media Center, that he currently considers a strategy to be more effective, “in which as many people as possible are vaccinated as early as possible is more effective, i.e. without holding back vaccine doses for the second vaccination.” According to the recommendation of the Standing Vaccination Commission, the second vaccination dose of people who have already received the first dose has priority over the first vaccination of others – and for this “vaccine should be put aside accordingly”.

“ In my opinion, accepting a possibly longer interval until the second vaccination is safe, at least for the mRNA vaccines, since the vaccinations in the studies showed a very high level of protection against Covid-19 just ten days after the first injection,” says Sander . The second vaccination could easily be delayed somewhat, “without significant reductions in effectiveness being expected”. But that is certainly only a temporary strategy. And it is important that all vaccinated people receive a second vaccination.

Why are vaccinations given in more than one dose at all? “ To increase the amount, quality and longevity of the antibody response,” explained the immunologist Akiko Iwasaki. The expert emphasizes that she is still in favor of giving people a second dose of vaccine, but because of the current urgency, the second dose can be postponed until there is more vaccine. The infection rate of the B.1.1.7 variant convinced them of this.

According to the Science Media Center, Peter Kremser, tropical medicine specialist at the Eberhard Karls University in Tübingen, also considers the British approach to be “fundamentally very sensible.” “As with other vaccinations, you can probably give the second dose after two to three months, since the first dose seems to be very effective. If the effect of the first vaccination does not decrease rapidly over time, the second vaccination could also take place later, for example after six months. We do not know that, yet.”

US immunologist Anthony Fauci said on Friday that the US would not follow the British example and delay the administration of the second vaccine dose. The optimal time for the second dose is known from the clinical studies. But he also said there were arguments for the British approach.

The British Medical Association, whose members now have to rebook existing second vaccination appointments for thousands of people, has very practical criticism of the procedure in Great Britain. The logistical effort is enormous and moving would be terrible for high-risk patients.

There is, however, a comparatively simple way of vaccinating more people in a timely manner: With the best tools, six instead of five vaccine doses can be obtained from one bottle of the Biontech vaccine. So far, however, the EU drug authority has allowed Ema to extract five vaccine doses – and in the product information for Comirnaty repeatedly instructs doctors to throw away the rest, even though Ema itself confirmed at SPIEGEL’s request that Biontech had advised them of the sixth dose before approval would have. Now the authority wants to check whether it changes the product information. As a result of the change, Germany would have 800,000 vaccine doses per week instead of the previous 670,000 doses per week, if the withdrawal of six doses was consistently successful, without any further efforts.

And in addition, the vaccination doses that have already been delivered would first have to be administered in Germany. While already 1.3 million cans delivered only just under 190,000 people received the first dose of vaccine.

Asset management Blackrock relies on Bitcoin for the first time

Mohsen Fakhrizadeh killed in Iran – who is behind it?

Windows 10 gets new features in the settings