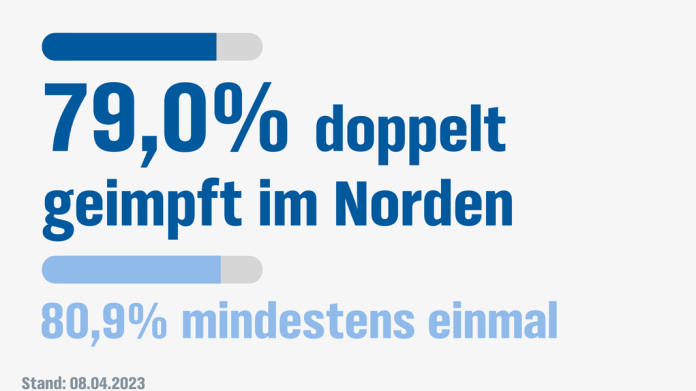 How many people in Lower Saxony, Schleswig-Holstein, Mecklenburg-Western Pomerania and Hamburg have already been vaccinated against Corona? How many have already received the second dose? And how high is the vaccination rate in the northern German states in a national comparison? Current figures and the most important information at a glance.

The  Robert Koch Institute (RKI) collects the data on all corona vaccinations administered in Germany. It publishes the vaccination figures from all federal states on working days. Here we show the current development of first and second vaccinations and the vaccination rate for Lower Saxony, Schleswig-Holstein, Mecklenburg-Western Pomerania, Hamburg and Bremen in a national comparison.

On December 27, 2020, exactly eleven months after Germany’s first Covid-19 case became known in Bavaria, vaccinations with the active ingredient from BioNTech and Pfizer began in Germany. Data from the Robert Koch Institute show over time how the number of people vaccinated has increased in the federal states of Lower Saxony, Schleswig-Holstein, Mecklenburg-Western Pomerania, Hamburg and Bremen since then.

So far, the federal government has assumed that so-called herd immunity will be achieved when at least 60 percent of the population is vaccinated. In view of the rapidly spreading new virus mutation in Great Britain, which is said to be much more contagious, doctors now assume that the threshold for herd immunity should rise to more than 80 percent.

Vaccination centers: Where to vaccinate in the north

The  first of a total of around 90 vaccination centers in northern Germany started operations at the beginning of January. However, this does not mean that all people who want to be vaccinated in Lower Saxony, Schleswig-Holstein, Mecklenburg-Western Pomerania, Hamburg and Bremen can get vaccinated there immediately. You need an appointment for this, and in the first phase it is primarily people who are given according to the appropriate Ordinance of the Federal Ministry of Health “with the highest priority entitlement” to a vaccination.

In addition to people over 80 years of age, this also includes residents of old people’s and nursing homes.

The  group also includes emergency medical services, nurses in the outpatient and inpatient area as well as employees in emergency rooms, Covid-19 wards and in medical facilities with close contact with vulnerable groups.

Here you can find out how to get vaccination appointments in the northern German states of Lower Saxony, Schleswig-Holstein, Mecklenburg-Western Pomerania and Hamburg.

The  vaccination centers in the north are set up. But who is it when and how can I register? An overview. more

Should pharmaceutical companies release knowledge and patents for the production of corona vaccines? Experts say that production could be faster and the pandemic defeated earlier. more

So-called medical masks must be worn on buses and trains as well as when shopping. More corona news in the live ticker. more

Spahn: “Have more than enough vaccine”