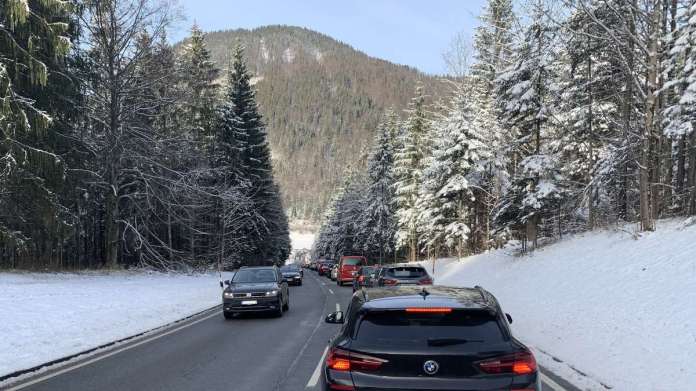 The stricter corona rules affect a district in Bavaria immediately: Miesbach has an incidence of over 200. The district becomes a restricted area for day trippers.

Miesbach – Another dream day in the snow with imperial weather – many went tobogganing or ice-skating on Sunday (January 10th) or went for a walk. As well on Spitzingsee in the Miesbach district, despite Corona and the appeal, Avoid accumulations. But such winter joys could be over for a while for outsiders: From Monday, the 15-kilometer rule for rural districts and urban districts with more than will apply for tourist day trips 200 new infections within seven days per 100,000 inhabitants.

That means: people are allowed to relax in their free time – for hiking, walks or sports – Move within a maximum radius of 15 kilometers from the local border. This does not apply if there are known valid reasons (e.g. work, doctor, shopping). If the incidence has dropped below the 200 mark for seven consecutive days, the measure can be overridden. Hotspots can also prohibit day trips from outside to their region.

And that is exactly what is planned in the Miesbach district, where the Seven-day post-outbreak incidence in 218 lay. Here, for example, people from Holzkirch are still allowed to stroll north of the Tegernsee, but no longer on the Schliersee, because it is a few kilometers above it as the crow flies. Day trippers who are not at home in the Miesbach district would be spared.

Currently, however, one is in the district office run by District Administrator Olaf von Löwis (CSU) General decree prepared. The content is that Visits from outside prohibited will. This would make the Miesbach district a restricted area for day-trippers from other districts and urban districts.

The order should take effect soon. Incidentally, a corresponding general decree applies from Monday in the district Berchtesgadener Land (Incidence 347). Violation threatens a fine of up to 500 euros. There should be more controls. – * Merkur.de is part of the Ippen network.

Christian Drosten on Corona in Germany: “Shouldn’t be naive”

Leonhard: “We are waiting for the second vaccine approval” | ...