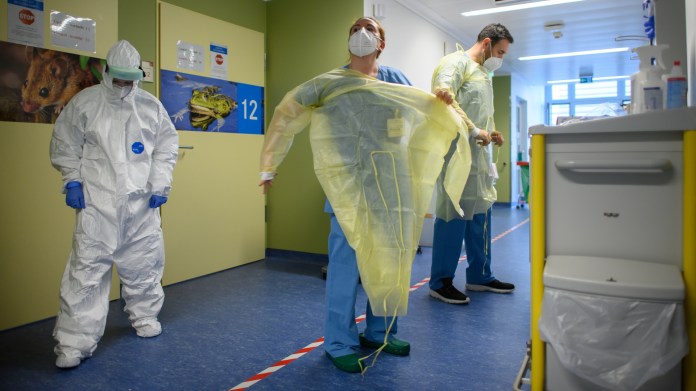 For a few days, the trend in the number of new infections has been falling slightly. Some Union politicians are therefore calling for a definitive end to the lockdown in mid-February – a strategy that the RKI warns of.

The  German health authorities reported 16,417 new corona infections and 879 new deaths to the Robert Koch Institute (RKI) within 24 hours, as the RKI announced.

Exactly one week ago, the RKI had recorded 18,678 new infections and 980 new deaths within 24 hours.

The  high of 1,244 new deaths was reached on January 14th. In the case of the new infections registered within one day, the highest value was reported on December 18, at 33,777 – but this included 3500 late reports.

The  number of new infections reported within seven days per 100,000 inhabitants (seven-day incidence) was 112.6 on Saturday morning, according to the RKI. Its previous high was reached on December 22nd at 197.6.

Demands for the end of the lockdown

In view of this slightly positive development of the infection rate, there are now voices from the Union who are pushing for an end to the lockdown in mid-February.

The  vice-chairman of the Union parliamentary group, Georg Nüßlein, calls for a definitive end to the lockdown after the current time limit until February 14th. Because of the massive effects, it is not justifiable to prescribe a nationwide lockdown until the incidence number falls below 50 or below 35, said the CSU politician of the “Augsburger Allgemeine”.

Saxony’s Prime Minister Michael Kretschmer also wants to implement easing after February 14, if it is responsible, as he told the newspaper “Welt” – initially in schools and hairdressers. “In March we can talk about retail. And after Easter also about gastronomy,” said the CDU politician.

It was only on Friday that RKI President Lothar Wieler urgently warned against loosening too early.

The  number of cases is still too high, said Wieler at a press conference with Federal Health Minister Jens Spahn: “We must not let up now.”

The  country could only return to a “halfway normal everyday life” if the number of cases became massive and permanently smaller.

Nevertheless, Klaus Reinhardt, President of the German Medical Association, who actually supports the lockdown, demanded perspectives for the population from politics. “It is understandable that people are tired after ten months of the pandemic and that the Corona protective measures are stressful,” he told the “Rheinische Post”.

The  ARD Germany trend for the ARD morning magazine recently found that almost one in two (49 percent) perceive the corona restrictions as a very strong or severe burden. According to Reinhardt, there must therefore be clear communication about vaccination capacities, among other things.

Federal Minister of Health Jens Spahn had on Friday evening in the daily take asked to understand the delays in the vaccination campaign. He pointed out that pharmaceutical companies are also dependent on supply chains and suppliers. Worldwide, the demand for vaccines in the pandemic is great.

The  two big manufacturers Pfizer and AstraZeneca had previously announced that they could not keep their promises and are therefore delivering fewer vaccine doses. This leads to bottlenecks. Pfizer and its German partner BioNTech justified the delivery difficulties with the conversion of a production plant in Belgium.

Spahn was confident that, despite the delivery difficulties at AstraZeneca, significant quantities of this vaccine could be inoculated in February.

Super Smash Bros. Ultimate: The next DLC fighter is two at...

Corona in Berlin: After the first injection against Corona – 101-year-old...

USA, Mexico and Guatemala agree to close borders for refugees

Now God and Jesus should also be gendered – world

Debate about Christmas services: outside, inside or cancel altogether?