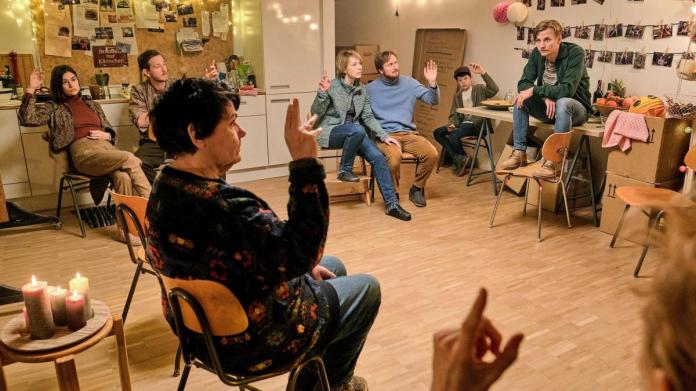 Culture This is how the “crime scene”

Stuttgart “Tatort” descends into the hell of a homeowners association

The y want to renounce capitalism, but stay in their circle of chairs until a corpse is found in their basement:

The  new Stuttgart “crime scene” around a homeowners association is funny, evil – and so true.

DHe is likely to be the most important Swabian export hit after Daimler, and not only every resident of Prenzlauer Berg will assume that they are people who say “konschdruggdief” when they think constructively, sit together in circles and analyze their communication until nothing is possible.

People who keep getting better and want to do everything and everyone better and at some point notice that they are getting worse and worse. Among other things because they are up to their necks with the Waldorf school salad of the narrow-mindedness they have always fought against.

Alternative eco-bourgeoisie, which allows not-yet-parents to sit in on initiative kindergartens to refrain from having children.

Needless to say, murder is of course also carried out in these chair circles. Man is man’s wolf – even if he is vegan.

Because the foreign shamping potential of a singing bowl flat share is much greater than that of the upper middle class family common in German crime thrillers, because the flat satire is much closer there and the worn-out cliché, something like the oasis of Ostfildern never occurs.

Dietrich Brüggemann – composer, screenwriter, director and highly gifted vivisector of German lifestyle – the fact that he dared to venture into this biotope with his second Stuttgart “crime scene” cannot be credited enough. Perhaps it was also traumatic experiences from his youth in the Swabian metropolis that helped him.

In any case, “This is our house” turned out to be a very fine film. An absolutely sympathetic yet nasty precise ethnological study. Which recognizes and shows every cliché and never falls into its traps. Which is funny and angry and sad.

The  oasis, an owner-initiative project with which free spirits wanted to decouple themselves from the fetish of money, has, and that’s where it starts, a corpse in the basement. Better: in the basement.

It came to light on the day of the inauguration because the foundation of the oasis had to be exposed. It wasn’t quite tight. Eco lamp, expensive and bad, hadn’t kept the water off.

Brüggemann still makes every joke himself that you could make about his comedy and its natives from the bourgeois province before you have thought about your own punch line to the end.

In the oasis it is extremely authentic, looks like improv theater, amateurs (such as the journalist Oliver Gehrs and the singer Heinz Rudolf Kunze) sit among professionals in Swabian Siberia.

Recall! This hemp oil can cause paranoia – economy

Berlin & Brandenburg: End of vacation and lockdown continuation in Berlin

Immunity after corona infection for at least eight months – healing...

Air purifiers and televisions: These are the highlights of the CES...

Courtship on the Amazon: “The white village” in the Drachengasse theater