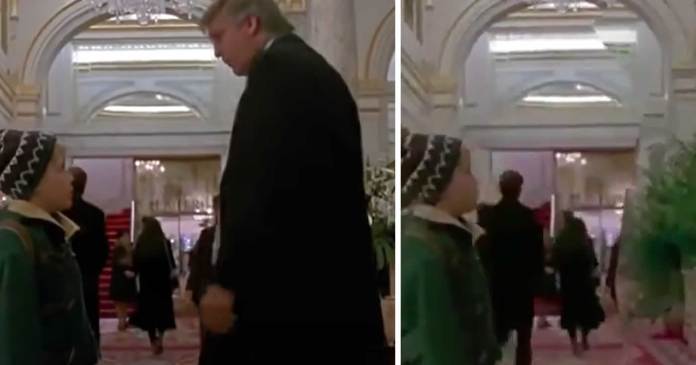 After Twitter, the next expulsion follows. Some Twitter users want to remove Trump from the movie “Kevin – Alone in New York”. A version without Trump is nothing new.

Some can no longer see the incumbent US president and are now removing him from films: “Kevin – Alone in New York” is a famous American Christmas classic in which the boy Kevin was left alone by his family for the second time. In one scene of the film, he walks through the entrance of the Plaza Hotel in New York and asks Donald Trump of all people for directions to the lobby.

That wasn’t a coincidence, though. Because Trump was the owner of the Plaza Hotel at the time and insisted on the appearance when he granted the filming permit.

Although Trump’s appearance is by no means decisive for the plot and only lasts a few seconds, for some Twitter users that is already too much. Without further ado, the current president was cut out of the film and the new version shared on Twitter.

The intervention that turns Trump into a transparent silhouette is not particularly artistic. Nevertheless, the video is enthusiastically shared on Twitter:

due to popular request I have removed trump from home alone pic.twitter.com/HoTA2csMl4

Version with cut out Trump scene, however, not new

Even before Christmas 2019 there was a little excitement because of the (non) appearance of Donald Trump in “Kevin – Alone in New York”. At that time, a Canadian television station was already broadcasting the film without the scene with Trump. Political reasons should not have been behind it, however. Because the cut version has been around since 2014 – two years before Trump was elected.

According to Merkur, a spokesman for the Canadian TV broadcaster justified the decision with the length of the film. For television, cinema films would often be shortened, otherwise they would not fit into the framework program. This also happened with other scenes from the film, none of them were “essential to the plot”.

Nevertheless, there was a short discussion on Twitter because of the scene that was cut out, during which Trump’s son Donald Trump junior was indignant:

Trump also responded with a tweet: “The film will never be the same again (just kidding)”.

This time he will not be able to say anything about his renewed cut on Twitter. Nevertheless: Donald Trump will not be easily cut out of our memories and history.

That could also be interesting:

Ingrid Broding, journalist and author, speaks in an interview with PULS 24 Anchor Rene Ach about the blocking of US President Donald Trump’s online profiles through Twitter, Facebook and Co, legal regulations and deplatforming. More on this here.

Rulers: handball when preparing goal is no longer automatically punishable –...

Samsung Galaxy S21 shows itself in the first video including benchmarks

Corona: RKI wants quarantine obligation of 14 days for contact with...

Why does everyone want this notebook?

Serious attack in Niger with more than 50 dead – Germany...