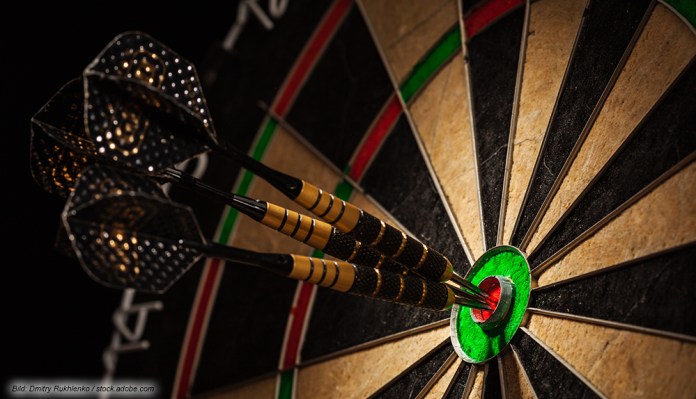 The -number one in the world rankings Michael van Gerwen has already been eliminated in the quarter-finals – now Gary Anderson and Gerwyn Price are fighting today in the Ally Pally for the title at the Darts World Cup.

Today the arrows fly for the last time at the PDC Darts World Championship 2021: After the three-time world champion and world number one Michael van Gerwen was completely unexpectedly eliminated in the quarter-finals, his conqueror Dave Chisnall also had to admit defeat in the semifinals.

The -final darts will be fired today by Gerwyn Price and Gary Anderson from the Throw Line of the Ally Pally. And it’s about a lot – not just prestige:

The -winner of today’s finals can look forward to an impressive cash prize of 500,000 British pounds. Converted, the new world champion can pocket more than 563,000 euros. For the runner-up, there are still 200,000 pounds of the total prize money of 2.5 million that will be distributed at the 2021 Darts World Cup.

For the Welsh shooting star Gerwyn Price, who already made it to the semi-finals at the 2020 World Cup, the biggest game of his career to date is rising today in up to 13 sets. Before his darts ambitions, Price had a successful career as a rugby player and can now win the most important PDC Grand Slam title for the first time in London against two-time world champion Gary Anderson from Scotland.

From 7.30 p.m. the free TV broadcaster Sport1 will show the countdown to the final between Gerwyn Price and Gary Anderson on free TV and livestream. If you can do without the preliminary report and only want to tune in for the final sets of the PDC Darts World Cup, you can watch the arrows fly at Sport1 from 8.30 p.m.

The -final of the Darts World Cup 2021 can also be seen on the sports streaming service DAZN. A paid membership is necessary here – new customers can, however, take advantage of the free trial month, which is still available as a trial offer at DAZN. After the trial month, there are costs of 11.99 euros for each subsequent month.

The -former pub sport darts is also becoming more popular in Germany – but only in relatively small steps. While in the neighboring country of the Netherlands with triple world champion Michael van Gerwen a draft horse has been fueling the publicity of the fringe sport enormously for years, the German Gabriel “Gaga” Celemens was eliminated after his sensational round of 16 against the Pole Ratajski.

For the marketing of darts on German TV, a German title contender is the essential missing ingredient. Whether Gabriel Clemens can live up to this role, he will still have to prove in the darts year 2021.

Trump makes a massive Twitter glitch: even a lawyer surprised by...

Departure from Tyrol only with a negative corona test

More in-house productions: Sat.1 bundles US series in one evening

Discounter: That is changing now at the checkout at Lidl and...

The recorder is the fourth most popular instrument in Germany