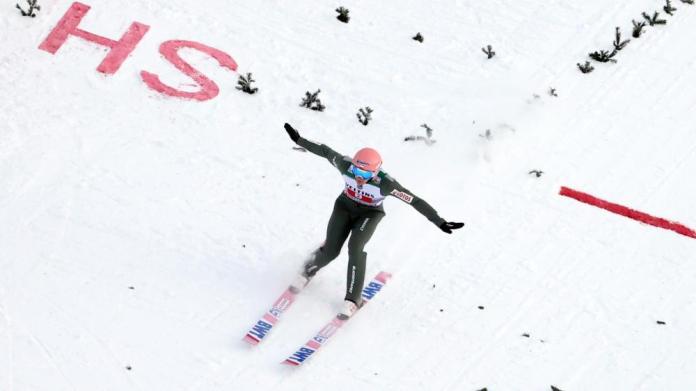 The tour defending champion got the hammer out at the start of the new year: Dawid Kubacki secured victory at the New Year’s competition in Garmisch-Partenkirchen – also thanks to a monster jump.

After 139 meters in the first round, the Pole showed great performance in his second jump and flew 144 meters – hill record! With a total of 282.1 points, he clearly won ahead of Norwegian Egner Granerud (who was still in the lead at halftime and scored 274.9 points in the end). Third place went to Piotr Zyla (260.4 points), another Pole. For the Polish team, this result is like balm on the soul, after having been in the unknown due to Corona until the end of the day whether or not they could even start the Four Hills Tournament.

The German jumpers did not feel happy this time: After his victory at the start of the tour in Oberstdorf, Karl Geiger still finished fifth as the best German, Markus Eisenbichler fell back to seventh after fourth in the first round. There was no South Tyrolean at the start in Garmisch-Partenkirchen.

After 2 jumps, the Norwegian Granerud leads the field with 555 points at the Four Hills Tournament, closely followed by Geiger (551) and Poland’s Kamil Stoch (548.3). The tour continues on Sunday with the Bergisel jumping in Innsbruck.

10 times the incidence by Easter – is Merkel’s Corona bill...

British coronavirus variant for the first time in Germany

Epic files complaint against Apple in the UK too | ...

Corona research: can the virus continue to be transmitted despite being...