There were demonstrations against the Corona measures in Stuttgart on Thursday evening. The police dissolved the gatherings because of violations of the Infection Protection Act.

At the end of the year, people in Stuttgart demonstrated against the corona policy of the federal government and the state government of Baden-Württemberg. There were repeated violations of the conditions. A total of five demonstrations took place over the Thursday evening, the police announced. How many people took part in total was initially unclear. The protests included “a New Year’s Eve without Corona measures” and “the dying gastronomy”.

According to a police spokeswoman, the officers checked attendees who claimed to have a medical certificate exempting them from the mask requirement. There were no major incidents.

A meeting on Karlsplatz was dissolved in the evening because the around 100 participants did not keep the minimum distances and a subsequent requirement to wear masks was also ignored. A spontaneous meeting arose from this demonstration with “loud displeasure” against the police. This also comprised around 100 people and was dissolved because many participants refused to wear mouth and nose protection, according to the police spokeswoman.

Weather in Stuttgart: Strong gusts and rain – it will be... 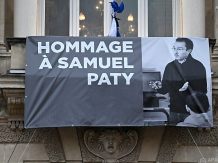