Despite almost 15,000 kilometers covered, pigeon “Joe” is now to be euthanized in Australia. (Symbol image)

Despite a proud journey of almost 15,000 kilometers, the Australian authorities were ungracious on Thursday with “Joe”, who owes his nickname to the future US President Joe Biden:

The  bird is to be put down because of the country’s strict quarantine rules.

“Has not been prepared for import in accordance with the law”

A spokeswoman for the Ministry of Agriculture said the pigeon was “not prepared for import in accordance with the law”. So “the sanitary status of this bird and all those who came into contact with it before arrival is unknown”.

The  spokeswoman also pointed out the “risk to bio-security”, the Australian bird world and industrial poultry farming that came from the uncontrolled pigeon.

Deaf “Joe” had been on the road since October

Meanwhile, the newspaper readers were enjoying the reports about Joe’s long journey. Kevin Chelli-Bird from Melbourne said that shortly after Christmas he discovered the bird, completely emaciated, in front of his house. With the help of a ring that the pigeon wore on its leg, it was possible to trace that it had taken part in a flying competition in the USA in October.

“We believe that she went off course on the flight and flew out to sea,” Chelli-Bird told the Herald Sun newspaper.

The n the pigeon must have landed on a ship and taken away. Perhaps “Joe” was “fed up” with the outgoing US President Donald Trump and therefore decided to “run away”. (AFP) 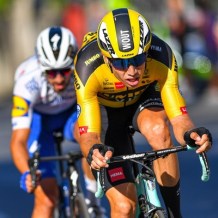 Van Aert: “Milan-Sanremo comes at the perfect moment for me”