BERLIN ( Dow Jones) –
The -German Institute for Economic Research (DIW) has called for the shutdown to be extended. Because of the persistently high number of corona infections, there is no way around it for health and economic reasons. Before the federal and state consultations on Tuesday, DIW President Marcel Fratzscher said that a long-lasting second wave of infections would be the greater evil. He also called for further support for the economy.

“ An extension of the hard lockdown is inevitable and right, also from an economic-political perspective. What is right for health applies to the economy: the top priority must be to control and contain the second wave of infections as quickly as possible,” explained Fratzscher. “

The -restrictions are of course painful and costly for the industries concerned. Without the lockdown extension, however, the economic costs of a long-lasting second wave of infections would be significantly higher.”

The -federal and state governments want to discuss on Tuesday an extension of the lockdown, initially limited to January 10th, which affects shops, restaurants, cultural and leisure facilities as well as schools and kindergartens.

The -prime ministers and the federal government would have to extend and expand support for the economy at their meeting, because companies are increasingly in difficulties, demanded Fratzscher. “ In terms of economic policy measures, politicians will have to readjust again this year so that they can more precisely reach those who need this help particularly strongly,” demanded the DIW boss.

He also hopes that the prime ministers will not repeat the mistake made in September and October when they communicated and acted too late, too hesitantly and in contradiction. “ This time you should definitely set a clear course and put political disputes aside,” warned Fratzscher.

Preferential treatment for those who have already received a vaccination would also be wrong. A high degree of fairness, traceability and transparency of the measures are essential for their acceptance and thus their success, according to the DIW.

Retail in the pandemic: who will benefit from the online boom?

“Angrier than anything else”: Draw causes a lot of trouble at... 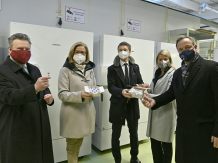 “Anyone who would make such a film today would be done...