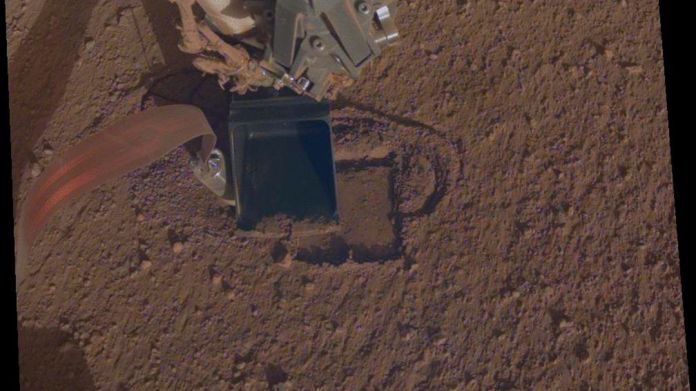 The  German Aerospace Center (DLR) announced on Thursday evening. “It was planned that he digs five meters deep,” said a spokeswoman. “He won’t do that anymore.”

The  “Mars mole”, which was partly developed in Bremen, flew to Mars on board the NASA lander “InSight” and landed in November 2018.

The  DLR also describes it as “a kind of self-hammering nail” – with a diameter of 2.7 centimeters. For two years he tried to dig deeper into the ground. Below the surface of Mars, it should measure temperature and heat flux.

This planet is and remains a difficult neighbor to explore.

Heike Rauer, Director of the DLR Institute for Planetary Research

On the way to the desired depth, however, the “mole” stalled – there was no progress. According to the information, the researchers found, among other things, that the soil in the area was completely different from anything they had seen before.

“We gave everything that was possible. But Mars and our brave mole just didn’t go together, ”said Tilman Spohn from the DLR Institute for Planetary Research, summarizing the end of the digging experiments.

The  “mole” had a number of difficulties

The  “mole” had difficulties from the start. In the meantime, he was stuck at a depth of 35 centimeters for more than half a year. Only when the lander helped “InSight” with its robotic arm did it go a little further. In October 2019, the drilling robot on Mars took the completely wrong direction. Instead of digging down, the “nail” came up, but was still in the borehole. At that time, despite the difficulties, the researchers still stuck to their goal of getting the “mole” to a depth of three to five meters.

The  “Mars Mole” was partly developed, integrated and tested at the DLR Institute for Space Systems in Bremen.

The y also investigated what stopped the mole on Mars.

Life on mars? This capsule could prove it!

Life on Mars, Dream or Reality? With the Perseverance, NASA launched the next space capsule. Does it provide proof of life on the red earth? © RND

“This planet is and will remain a difficult neighbor to research,” said Heike Rauer, Director of the DLR Institute for Planetary Research in Berlin-Adlershof.

The  “Mole” experiment “HP3” (Heat Flow and Physical Properties Package) will at least provide temperature measurements of the top layer of the Martian soil. According to the DLR, other scientific projects of the “InSight Mission” should also continue.

The se include a seismometer, a radio wave experiment on the nature of the core of the planet and weather sensors.

Who will be a millionaire: Kathrin Kirste says Jauch what viewers...

Half a chance for Austria at the Oscar abroad