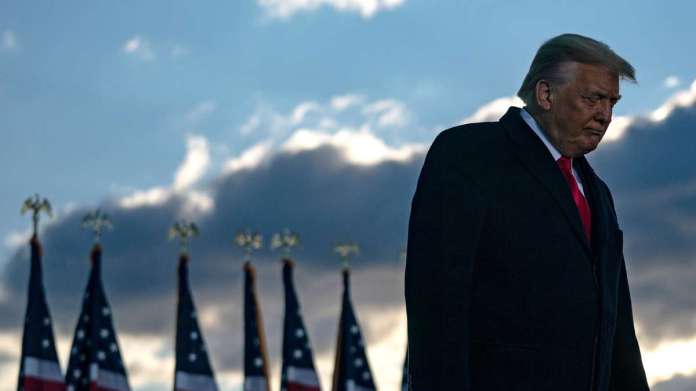 Update from Friday, January 22nd, 2021, 11.25 a.m .: While the investigation is against Donald Trump keep walking, one of his law firms has now separated from him. This is reported by the specialist portal “American Lawyer”. Accordingly, the law firm Morgan Lewis & Bockius has represented Trump and the Trump Organization in tax matters so far.

The  firm is currently in a dispute with the New York Attorney General. It is about documents of the Trump Organization.

The  Public Prosecutor’s Office demands the surrender of the documents that the law firm has refused to date.

The  withdrawal from Donald Trump through the law firm Morgan Lewis is not the first. In the past few days, other law firms have distanced themselves from the former US president. Including Seyfarth Shaw LLP. After storming the Capitol, the firm had distanced itself from Trump.

After the end of his immunity: what Donald Trump is now threatening

First report from Wednesday, January 20th, 2021, 12.09 p.m .: Washington D.C. – Donald Trump could be sure during his presidency that he would not be prosecuted. His immunity granted him fool freedom.

With the Inauguration of Joe Biden this is gone. Trump there is now a threat of numerous criminal and civil investigations.

The se investigations are already ongoing against Donald Trump

The  Manhattan Attorney’s Office is investigating the business movements of the Trump-Organization.

The  criminal suspicion of Banking and insurance fraud stands in the room. Another case in the state of New York involves similar allegations, as reported by the Washington Post.

Civil law must be Trump with other family members accused of having defrauded niece Mary of several million US dollars. It is about an inheritance dispute.

The re are also other allegations of having cheated several tenants out of money. Furthermore was Trump sued by two women who claim he was sexually abused.

The se proceedings may still lie ahead

The  obstruction of US justice could be Donald Trump can still be accused in some cases. Special investigator Robert Mueller, who investigated Russian interference in the 2016 US election but failed to find sufficient evidence, presented ten cases of obstruction of justice that he encountered. This includes influencing witnesses, making false statements up to and including perjury in interviews and trying to dismiss Mueller, as reported by “CNN”.

During his presidency, Trump is also said to have placed his personal financial interests above those of his office several times. So were delegations foreign heads of state conspicuous often in Trumps Hotel housed. In addition, at the expense of taxpayers, the US military became one Trump-Resort quartered in Scotland. This is reported by the Washington Post and the New York Times, among others.

Another point for Trump could be problematic are his Tax returns. Time and again, the tax authorities let it be known that Trump was on the verge of legality and that there were numerous indications of legal tax avoidance.

The re is also a possible charge of “inciting insurrection”. This is a criminal offense and relates to the riot in Washington, which caused the Democrats to initiate impeachment proceedings.

Is there still a way out for Donald Trump?

Donald Trump stressed regularly in the past week that he wanted to pardon himself. He implied a kind of all-round protection, in the sense of a immunity. However, this is not the case. Self-denial, which by the way has not yet been considered by a US president, only offers protection at the federal level. As noted, the New York Attorney’s Office is investigating insurance fraud and the Georgia Attorney’s Office is considering an election fraud charge against Trump. This is reported by the “New York Times” and refers to Trump’s call in which he wanted to incite the election officer there to fraud.

The  Atlantic” reports, legal experts do not assume that the Supreme Court would put a US president above the law: even though the Republicans have a majority there.

Dem Impeachment proceedings in itself can Trump no longer withdraw. In the US Senate, a two-thirds majority is required, which would be possible with 17 Republican votes.

What consequences an impeachment would have for Donald Trump

Falls Donald Trump Should he be removed from office, it would have far-reaching consequences for him. For one thing, he is no longer allowed to run for president. He had emphasized several times that he wanted to run again in the US election in 2024.

Second, he would not receive the annual pension of $ 200,000. That should further fuel his private financial situation since Trump according to the “New York Times” is more than 400 million US dollars in debt. (Tobias Utz)

After falling out of a hotel window in Berlin – who...

Daft Punk broke up after 28 years

Post-Brexit: UK and EU have apparently reached an agreement