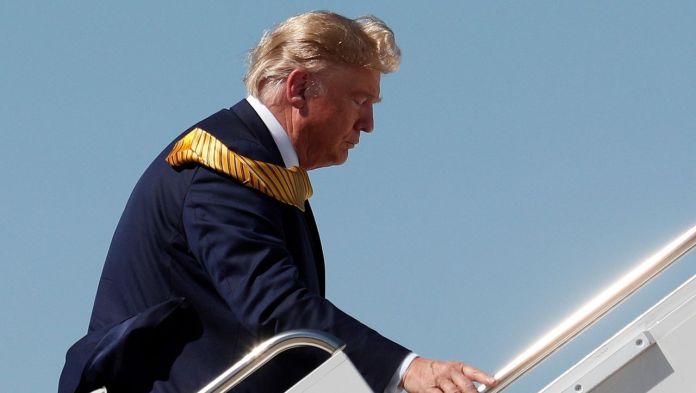 US President Donald Trump apparently plans to leave Washington the morning of the swearing-in of President-elect Joe Biden.  The  Washington Post and the news agencies Reuters and AP report this with reference to anonymous sources. According to this, Trump wants to leave Washington via the Joint Base Andrews military airfield, where a farewell event is also planned.

The n Trump will travel to his Mar-a-Lago property in Florida, Reuters reports.

Jim Acosta, CNN’s White House correspondent, also tweeted that Trump would leave Washington on the morning of January 20. According to his information, a ceremony like a state visit is planned for Trump’s departure, including a military band, gun salute and red carpet.
Advisors urged Trump to receive Biden in the White House before he was sworn in, Reuters reports, citing an anonymous administrative officer. Trump does not want to comply with this.

Trump had already announced at the beginning of January that he would not take part in Biden’s swearing-in ceremony. Trump’s presence at the ceremony would be political, but it has no legal effect. Biden is sworn in as the new president even without his predecessor. Biden’s press secretary Jen Psaki had previously said that Trump’s presence was not one of Biden’s “top ten priorities”.

The  last president to skip an inauguration was Richard Nixon in 1974. Nixon had stumbled upon the Watergate affair and had to resign, followed by Gerald Ford.

A few days ago, the US House of Representatives voted in favor of the second impeachment proceedings against Trump. After the storming of the Capitol, the president had to answer for “inciting a riot”.

The  process in the Senate will probably only be decided after Biden is sworn in.

Little firecrackers, parties and crowds: people celebrate the turn of the...

Information about the appearance of Snoop Dogg – The Young Bucks...

How truck drivers experience the winter chaos in Germany