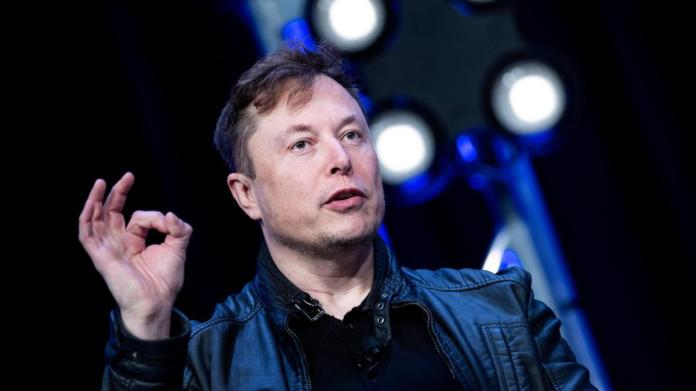 FElon Musk has a guilty party for the violent assault by Trump supporters on the American parliament: Facebook and its boss Mark Zuckerberg. “This is called the domino effect,” wrote the Tesla boss in a tweet on Thursday.

To do this, he put a so-called meme, a picture with a label: It shows different sized white dominoes. The largest is a tweet by an American journalist about the storming of the Capitol, right at the front on the smallest stone reads: “A website to rate women on campus.”

In Silicon Valley in particular, this is not a hidden hint on Facebook, but a wink with the fence post. Because the starting point for founding the largest social network in the world was precisely that: a website with which one could evaluate the attractiveness of female students on the campus of the elite Harvard University, where Zuckerberg was studying at the time. Initially he called his page “FaceMash”, but Facebook developed from this within a short time.

For Musk, the matter is clear: anyone who programs a page in the dormitory that demeans women inevitably sets a process in motion that ends after a few years in a violent coup attempt. It’s a frontal attack by a Silicon Valley heavyweight against a fellow billionaire – a public argument between the richest person in the world, Elon Musk, and number four, Mark Zuckerberg, whom he passed just a few months ago.

Ironically, Musk chose Twitter, of all things, a social network to blame Zuckerberg for the polarization of the American public and the attack on US democracy. Trump has always incited his followers, especially via Twitter. 88.7 million people follow Trump on the platform, Musk brings it to 41.4 million.

Facebook reacted on Thursday afternoon German time: Zuckerberg announced on his own platform that Trump’s accounts on Facebook and Instagram will be blocked until further notice. After the outbreak of the riots at the Capitol, the group had already temporarily blocked the accounts. “The shocking events of the past 24 hours clearly show that President Donald Trump intends to use his remaining term in office to undermine the peaceful and rule of law transfer of power to his elected successor, Joe Biden,” wrote Zuckerberg. Trump has been allowed to use the platform in recent years, but the general conditions have now changed due to the storming of the Capitol. “We believe the risks of allowing the president to continue using our service during this transition period are simply too great,” wrote Zuckerberg.

Quite a late reaction after years of criticism. And yet, the allegations that Tesla boss Musk is making are abundantly self-righteous. Musk was among those who tried a hug strategy early in Trump’s tenure. He took part in two of Trump’s advisory bodies after the US President’s surprising election victory.

And he stayed on board for months despite many controversial decisions and regulations of Trump. It was only when the president announced that he would withdraw from the Paris climate agreement that he ended his consultancy job in May 2017. Ironically, when Trump questioned one of the sales arguments for electric cars with climate change and its fight.

In the years that followed, Musk was often not far from Trump politically. Like the outgoing US president, he was one of those who publicly downplayed the danger of the corona virus for a long time. Here, too, he did this mainly because the restrictions temporarily brought Tesla production to a standstill.

Storming the US Congress

Now, shortly before the end of Trump’s term of office, when Tesla can no longer suffer any disadvantages from distancing and the full scope of four years of populism becomes visible, the public blame in the direction of Facebook suddenly follows. Of course, that does not mean that the criticism of the social network and its shared responsibility for the polarization of society is wrong, but that it comes from Musk of all people seems pretty self-righteous.

It’s not the first time Musk has dealt against Zuckerberg. In the past few months, the Tesla boss made no secret of his rejection of Facebook. And on Thursday he followed up on Twitter again: to a report that WhatsApp users must agree that their data will also be shared with Facebook in the future, Musk responded with another tweet: “What you don’t say. Reminds me of a classic, “he wrote and posted another meme underneath.

It shows a boy and Zuckerberg. The boy says: “My father told me you are spying on us”. And Zuckerberg replied in the internet joke: “He is not your father.“Then Musk recommended his followers to use the competing service Signal instead of WhatsApp, which belongs to Facebook. He and Zuckerberg will probably no longer be friends.

Second highest mountain in the world: K2 conquered for the first...

US Congress overrides President Trump’s veto for the first time

Union Berlin: Kruse returns to the squad – Karius back in... To sleep or not to sleep with Crowe and Timberlake –...

82-inch TV with unrivaled prices at Aldi – is it worth...