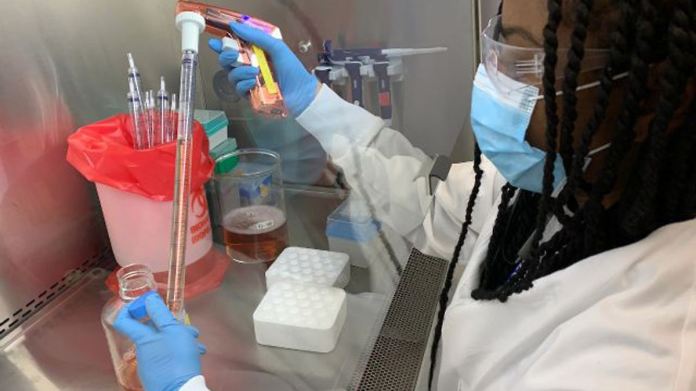 Europe is proceeding with caution
Are antibodies the Covid magic bullet?

In the USA, the use of so-called monoclonal antibodies in the fight against corona has already been approved.  The  then US President Donald Trump had highly praised the funds.

The  approval process is not even running in the EU. Are we missing an important weapon against the pandemic – or is skepticism appropriate?

What kind of antibodies are these?

Monoclonal antibodies are made in the laboratory and are designed to disable the virus after infection. Monoclonal means that the antibodies used are all the same and attack the virus at a clearly defined target. In contrast to this, after a vaccination, the human body forms a mix of antibodies that can bind to the virus in different places. In this case, experts speak of polyclonal antibodies.

What resources are already in use in the USA?

The  US company Regeneron mixes two monoclonal antibodies for its antibody cocktail against Covid-19.

The y are directed against two regions of the spike protein on the surface of the Sars-CoV-2 virus.

The  advantage of the mixture is that it increases the likelihood that at least one antibody can actually be really effective in every special application, explained the Frankfurt virologist Sandra Ciesek in the NDR podcast “Coronavirus Update”. In contrast, the product from the US company Eli Lilly contains only one monoclonal antibody. Both Regeneron and Eli Lilly have had US emergency approval for their drugs since November.

For which patients are the drugs intended?

Both drugs may be used in the United States to treat patients 12 years and older who are at risk of developing severe Covid 19 symptoms.

The  drugs can reduce the likelihood of a severe course, according to the US Food and Drug Administration. Patients who are in the hospital or need oxygen should not be given the drug. According to Regeneron, test persons whose immune systems had not yet produced their own antibodies against the virus benefited the most. FDA chief Stephen Hahn said that studies gave the best results within the first ten days after infection. However, there is not enough data overall, say many scientists.

How do these antibodies work against Covid-19?

The  antibodies are designed to prevent the virus from entering the cell. According to Regeneron, the treatment leads to a reduction in the viral load, i.e. the amount of detectable viruses, and to a faster resolution of the symptoms.

What does former US President Trump have to do with it?

After Trump became infected with the coronavirus in October, he was treated – among other things – with Regeneron’s antibody cocktail. At the time, the drug was not yet approved in the USA. After his comparatively quick recovery, Trump publicly described the cocktail as a “miracle” and “cure” and promised to make it widely available in the shortest possible time.

How do scientists rate the antibodies?

Many researchers were much more skeptical. Among other things because it had been shown that the antibodies probably cannot really help with advanced Covid 19 disease.

What is known about side effects?

In a clinical study, there were no increased severe side effects in patients treated with the Regeneron agent compared to a control group. However, the FDA points out that there is a certain potential for severe hypersensitivity reactions, among other things, with the two antibodies used. In addition, they are still being investigated, so certain risks may not yet be known. According to the FDA, two out of 850 cases of the drug from Eli Lilly had more severe side effects in studies. Here, too, some side effects may not even be known.

Will the funds be used nationwide in the USA?

The re are a lot of patients who, according to the requirements of the emergency approval, would be eligible for a treatment with the antibodies, but the doses that were far from available were insufficient, said Erin Fox of the University of Utah of the “New York Times”. “Overall, one can say that antibody therapies are very expensive and that antibodies are very difficult to produce,” said the German researcher Ciesek.

When could the funds be available from us?

At the European Medicines Agency EMA there is no approval process for such an antibody treatment, as can be seen from the information on the authorities website. However, Regeneron plans to apply for approvals in the EU together with the pharmaceutical company Roche as a partner, as a spokeswoman for the German press agency said. Eli Lilly and other companies are likely to follow. Virologist Ciesek assumes – also because of the complicated and expensive production – that “this is probably more of an application that will be carried out in a very controlled manner, for example with high-risk patients, but will certainly not be feasible for everyone”.

Tesla has deposited a security deposit – construction can continue

Prince William was traumatized while serving as a rescue pilot Daniel Ricciardo: A farewell race in “no man’s land”