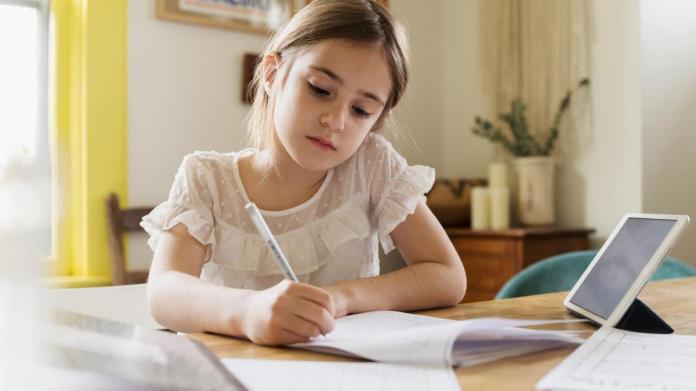 EActually, it should start after the summer vacation 2020 at the latest: The federal government made more than 500 million euros available for the so-called “immediate terminal device program”. The money should be used to pay for laptops and tablet computers, which can be loaned to students throughout Germany so that they can continue to study in the event of another lockdown.

But as early as the summer, after research by WELT, it became apparent that the instant program would probably not live up to its name. The purchase and distribution of tablets and laptops began rather slowly in many federal states.

It is now clear: whether pupils from lower-income families whose parents cannot afford a computer for their children can take part in classes in the second lockdown depends on where they live.

The fact that in some federal states part or even the majority of the available money was not spent on tablets and laptops is not solely due to the schools or the respective state government. There is another problem: The large manufacturers – above all the US company Apple – cannot cope with the great demand for such devices.

This is most evident in the example of Thuringia. There would be more than 14.7 million euros available. But according to the State Ministry for Education, Youth and Sport, only a good two million euros were called up. So far not even 14 percent of the money has actually been spent.

“The market has been swept empty since autumn”

In Thuringia, the so-called school authorities are responsible for purchasing the equipment, i.e. the individual communities, cities or districts in which the schools are located. They would have liked to shop, but they simply don’t get any tablets.

“Nationwide, there are currently enormous delivery problems for mobile devices, especially for the Apple tablets, which are particularly popular with schools and school bodies,” says a spokeswoman for the Thuringian Ministry. “The school authorities have reported delivery problems since July 2020 and the fact that many contractually bound suppliers are currently unable to specify a delivery date or that delivery is only promised for the first quarter of 2021.”

The first quarter is running, but such a date may also mean that the devices will not arrive at schools until March. It is completely open whether they are still needed or whether lessons will take place in schools again.

Apple does not want to comment on the delivery difficulties described. However, the problems are confirmed by the companies that buy and set up the tablets and laptops on behalf of the schools.

“The market for laptops and tablets has been empty since autumn – not only in Germany, but worldwide”, says Martin Mayr, Senior Vice President at the Munich IT service provider Cancom. The supply chain for the devices was only torn between February and April due to the pandemic.

“While the logistics were just starting up again, the sustained strong demand from the economy and increasingly also from the education sector set in at the end of the first quarter,” says Mayr. “At the beginning of the fourth quarter, the Christmas business came for many manufacturers.” So while private customers in the Apple stores still received iPads as gifts, they were in short supply in large numbers.

School authorities have to take care of procurement themselves

In fact, the very fact that the state is suddenly making so much money available to buy tablets has made them hard to get. Because the number of devices required is enormous: The IT service provider Bechtle, for example, has delivered around 125,000 iPads to North Rhine-Westphalia alone.

But the demand is too great to be able to meet all requests quickly, confirms a Bechtle spokeswoman. “Overall, the tablet market has been bought short,” she says. If you ordered in December, you may not expect the tablets to be delivered until March or April. That’s a lot of time in a pandemic when students sit at home and are unable to attend class.

Large providers such as Cancom and Bechtle have even easier access to the coveted devices than smaller providers: “We have the highest partner status with Apple, others have an even harder time,” says the Bechtle spokeswoman. According to the industry, it takes a particularly long time, especially in the federal states, in which every school authority has to take care of the procurement of the computers themselves and there are no state-wide or at least regional framework agreements.

It doesn’t look as bad in all federal states as it does in Thuringia. Smaller federal states in particular seem to have an advantage: In Hamburg they proudly report that they have already successfully completed the immediate program and purchased 41,000 devices. In Saarland, too, they are finished and have bought 12,000 devices.

The ministry announced that the state of Baden-Württemberg is just as far along, where 97.5 percent of the available sum has already been spent. A total of around 300,000 devices are to be ordered. In Saxony, procurement is still ongoing, but the Ministry of Culture announced that almost 39,000 devices have already been purchased.

In Bavaria, around 90,000 additional laptops and tablets have been bought with federal and state funds, but more than 100,000 additional devices are to be purchased as part of the immediate program. In Berlin, too, it has so far only been possible to hand out half of a total of 40,000 tablets for which the money would be enough to students.

Saxony-Anhalt has procured a third of the planned equipment centrally, two thirds should be bought by the school authorities themselves. Central procurement is already relatively far there with 12,000 out of 15,000 computers. There is currently no data on the around 30,000 tablets and laptops that are to be ordered by the individual schools.

In many federal states, the ministries say they have no overview of how many devices have actually reached the students so far. There you know how much money you have paid out, but you have not yet recorded whether tablets or laptops were also delivered for it. This is how Mecklenburg-Western Pomerania, Lower Saxony and Rhineland-Palatinate reported.

In Brandenburg the figures were collected but not published. In Bremen, the deadline runs until mid-January by which the schools have to report how many devices they have actually been able to procure – so far, a good 23,400 new tablets and laptops have been registered.

But even central procurement is no guarantee: According to the responsible ministry, 56,000 devices have been delivered in Hesse so far, 75,000 have already been ordered, but the demand is 100,000 to 120,000 – the necessary money is available.

Due to the scarcity of Apple devices, some school authorities are now in the process of switching to other manufacturers, according to Bechtle. But even they often cannot deliver for a long time. “Actually, all manufacturers and device groups are currently affected,” says Cancom manager Mayr. “Apple has specifically developed the education market in recent years, and now the demand for tablets is correspondingly high.”

Bechtle also reports that the US group has succeeded extremely well in asserting itself on the market for student computers. In Saarland, for example, five out of six counties would rely on Apple. This is also due to the fact that not only are the devices themselves easy to use, but Apple is also developing special programs for device and software management for schools.

“The Apple School Manager has established itself as the standard in many schools,” says the Bechtle spokeswoman. The iPads are also particularly popular with teachers, parents and students, and this is where the Group’s marketing pays off. In addition, Apple has thought of its own advanced training programs for teachers and even the inclusion of disabled students. You just have to get the coveted devices.

One fifth of the rescue workers complain of side effects after...

Air purifiers and cordless vacuum cleaners from Dyson at the lowest... Tesla together with VW, BMW or Daimler? Elon Musk does...

Diablo 3 was originally intended to be an MMO