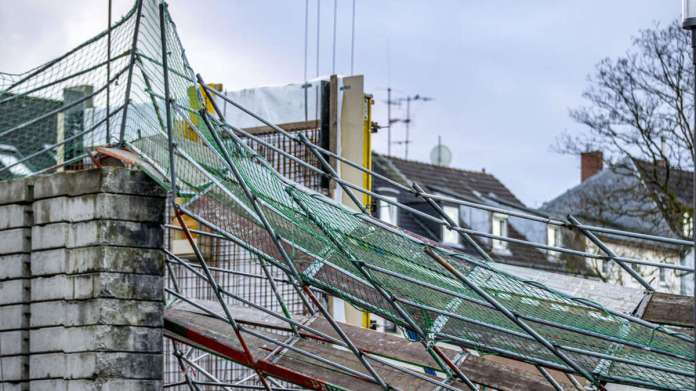 The  weather is extreme.

The  German Weather Service has now announced the highest warning level at KATWARN and warns of “extreme hurricane gusts“At speeds up to 140 km / h for locations over 1,000 meters. In the lowlands, the wind blows with gusts of up to 70 km / h, reports the DWD. In some parts of Germany, the “Goran” storm has already left its mark.

A smaller truck was built in the East Frisian district of Aurich captured by a gust of wind and thrown upside down in a ditch, the police said on Thursday morning. Fortunately, the driver (41) was only slightly injured.

On the ICE route Nothing went between Cologne and Amsterdam because of fallen trees. Trains were diverted between Oberhausen and Emmerich on the Lower Rhine and some were 45 minutes late.

The  Storm low “Goran” moves from the west over Germany.

The  cold front mixed up the weather mightily: with spring-like temperatures and strong winds.

Before a Foehn storm with hurricane gusts (Bft 12) warn the weather experts to the Alps. Squalls sweep across the country to the west and northwest. Heavy squalls are to be expected on the North Sea islands and on the North Sea coast.

At the same time, the DWD points out the possible dangers: “WARNING! Note on possible dangers: For example, trees can be uprooted and roofs damaged. Pay particular attention to falling branches, tiles or objects. Close all windows and doors! Secure items outdoors! In particular, keep a distance from buildings, trees, scaffolding and high-voltage lines. Try to avoid staying outside!”

Extreme weather in parts of Germany: Meteorologist warns of major floods – “Like a dishwasher”

Munich / Wiesbaden – more violent Weather change in Germany: After huge amounts of snow of Bayern to the south Baden-Württemberg has not only in the south of the republic thaw used.

Weather in Germany: Snow masses are now followed by floods in the southwest

It should get really warm, especially from Tuesday, January 26th, explains the Meteorologist Dominik Jung the portal wetter.net: “We’re talking in the southwest of up to 14 degrees, a lot Regen and Squalls *.“

Jung therefore warns of a “major flood” in parts Baden-Württemberg. “Everything works like a big dishwasher, and it washes the snow off into the rivers. Together with the heavy rain, the levels of the rivers rise rapidly, ”he explains Weather expert continue.

So, for example, at Maxau am Rhein near Karlsruhe in the next week “expected an increase of a good three meters”.

Weather in Germany: Floods between the Rhine, Danube and Lake Constance

Is it up to the Flood control center Baden-Württemberg also rise at the following rivers High water level in the coming week (around December 26th) partly strong:

Weather forecast: Extreme cold comes to a halt in front of Germany

The  Winter On the other hand, it is “being slowed down more and more”, Jung continues: “

The re will no longer be a flatland winter in January.

The  extreme cold is exactly before the border to Germany (from Poland, d. Red.) came to a standstill and must now retreat. ” (pm) * Merkur.de is part of the Ippen-Digital network C-Quadrat takes a stake in Accuro

Bachelor winner Francesca Morgese: Her pictures are so fake