Extremism – Berlin:Kalbitz against AfD: Appeal process before the higher court

The  Berlin Chamber Court is negotiating today in an appeal process about an urgent application by the Brandenburg state parliament member Andreas Kalbitz against his expulsion from the AfD.

The  48-year-old wants to ensure that he can exercise his rights as a party member again until the decision in the main proceedings and thus be again the state chairman of the AfD.

The  Berlin Regional Court rejected the urgent application last August. Kalbitz had appealed against this, which the Court of Appeal is negotiating.

The  federal arbitration court of the AfD had confirmed the cancellation of the party membership of Kalbitz last July after a corresponding decision of the federal executive committee in May.

The  reason for the decision was given by the board of directors that when he joined the party in 2013, Kalbitz had not given a previous membership in the now banned right-wing extremist “Heimattreuen Deutsche Jugend” (HDJ) and the Republicans. 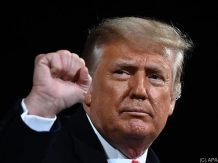 Brexit: “The same procedure as every year”