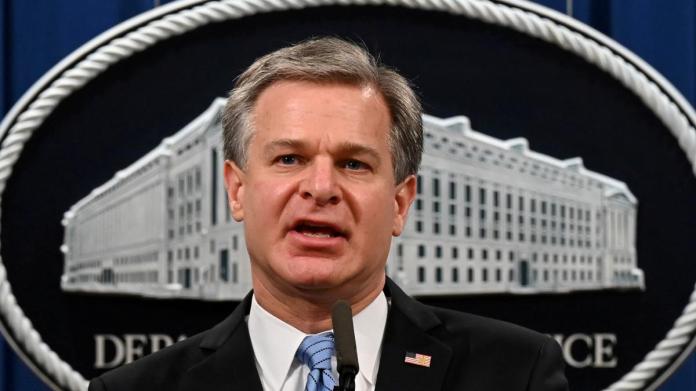 “We are concerned about the potential for violence”

Exactly where an angry mob raged last week, the future US president is to be sworn in in a few days.

The  security authorities are following up many indications of possible copycat actions. What of it is just talk? What is serious?

Dhe US Federal Police FBI warns of potential acts of violence surrounding the swearing-in of future President Joe Biden in the coming week. At the moment, “worrying online talk” about possible actions around the inauguration can be observed on a large scale, said FBI chief Christopher Wray on Thursday (local time) in Washington.

The se include calls for armed protests.

The  clues would be analyzed and examined for their actual threat potential. “We are concerned about the potential for violence at several protests and rallies planned for the next few days here in DC and in front of state parliament buildings,” Wray said.

More than 200 suspects have already been identified who may be planning actions based on the model of the Capitol riots, the FBI director said at a meeting of the chiefs of several security agencies with the acting Vice President Mike Pence. To the address of possible rioters and violent criminals, Wray said: “We know who you are.” Anyone planning acts of violence in the next few days should expect to get a visit from the FBI.

Supporters of the outgoing US President Donald Trump had violently entered the congress headquarters in the capital Washington last Wednesday.

The  security forces were not up to the onslaught of the rioters. Five people were killed in the riots.

Biden is to be sworn in on Wednesday in front of the Capitol in Washington.

The  congress building in the US capital is traditionally the setting for the swearing-in ceremony of the US presidents. In itself, the inauguration is an event with the greatest security requirement. This year, however, in view of the recent riots, this is particularly true – even if the ceremony takes place without the usual mass audience due to the corona pandemic.

The  arrests are also a warning to others who are considering acts of violence.

The  short message service Twitter also warned a few days ago that concrete plans for further armed protests were already being disseminated on its platform and elsewhere. Among other things, there is talk of another attack on the Capitol and on parliament buildings in states next Sunday.

The  area around the Capitol has now been cordoned off and a security fence has been erected. In addition, several thousand members of the National Guard – part of the US Army Reserve – were deployed to protect the Congress headquarters.

The  chief of the force, General Daniel Hokanson, said on Thursday that around 7,000 soldiers are currently deployed.

At the inauguration, the Secret Service responsible for protecting the President is in charge of the security measures. Secret Service chief James Murray said preparations for the swearing-in had been going on for many months. His troops are firmly convinced of the security concept that has been developed, but remain extremely vigilant.

Eintracht would like to keep defense bulwark – Sky Sport Austria

Curfews due to Corona now also in Frankenthal and the Rhein-Pfalz-Kreis...

Coronavirus: Mother-parent counseling, even during the corona crisis

Alexander Albon failed because of this