The Federal Council has heard the hosts’ calls for help! The hardship regulation for companies battered by the Corona crisis will be relaxed. Those affected should get support money more quickly. SVP finance minister Ueli Maurer (70) passed his proposals with great ease. In concrete terms this means:

2.5 billion is not enough

Finance Minister Maurer spoke in front of the media of a “fair solution” and “generous compensation”. The previously spoken CHF 2.5 billion would probably not be enough – he wants to apply for an additional loan in parliament in the spring session. How high this will be is still open. That will now be calculated together with the cantons.

The cantons are now particularly challenged. More than half of the cantons are already paying hardship benefits in January, and almost all cantons should be ready by February, according to the Federal Council.

Funds should flow as quickly as possible

“The implementation is not that easy,” said Zurich SVP finance director Ernst Stocker (65). For Zurich alone, he expects 20,000 applications. That must now be implemented in two months. You have to proceed correctly, but: “The funds will flow!” In Zurich it will probably take until the end of February due to the legal requirements.

“The expansion of the compassionate use program is urgently needed,” said the Basel government councilor Christoph Brutschin (62) as President of the Conference of Economics Directors. “We have to ensure that the money reaches those who need it as quickly as possible – and there are quite a few.” And he emphasized: “The cantons do what they can!”

The catering industry commented on the proposals at a separate media conference. “The Federal Council has recognized the seriousness of the situation,” said Gastrosuisse President Casimir Platzer. It is an important step in the right direction. The decisive factor is now how quickly the hardship benefits are paid out. It is important that the companies can be helped immediately.

After the dispute between Ankara and the EU: What Foreign Minister...

Two house bans after disruptive action in the Bundestag | ...

Sat.1 throws “Biggest Loser” candidate out of the show – Tv

Covid urine test can predict whether there is a threat of... 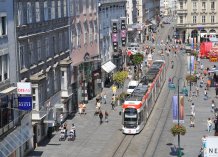