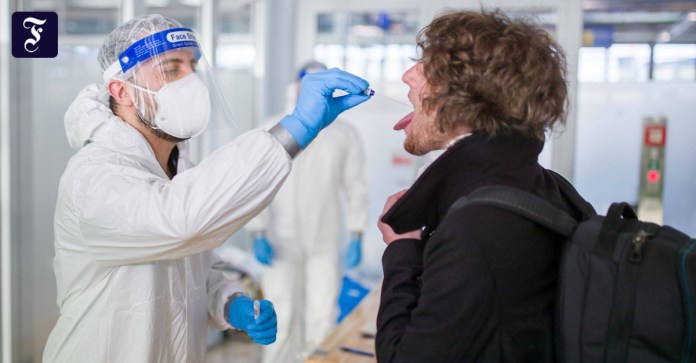 Fo People who travel to Germany from areas with particularly high numbers of corona infections could soon be required to test. As the federal government’s tourism commissioner, Thomas Bareiß (CDU), announced on Monday, the federal government wants to introduce a new tiered system in the new entry regulation. Countries and regions with more than 200 new infections per 100,000 inhabitants in seven days are to be classified as “high-risk areas”. In addition to the quarantine requirement that continues to apply, people entering the country will have to do a PCR test in the future.

According to Bareiß, a test could also be compulsory for travelers returning from areas where a virus mutation is spreading. According to current knowledge, the current mutation in Great Britain is significantly more contagious than other variants of the coronavirus and is spreading faster in the population. “We really have to be careful here. If the mutated viruses spread more and more in Germany, there is a fast chain of infection, ”warned the tourism officer. “That would put an enormous strain on our health system.” Occasional cases of the mutated coronavirus have already been detected in Germany. Even if this spreads faster, the course of the disease does not appear more severe than with the original virus.

The current entry pattern regulation stipulates that travelers who return to Germany from a risk area must be tested for the virus a maximum of 48 hours before or immediately after entering the country. Even after a negative test, they have to be placed in a ten-day quarantine, which can be shortened if a second test turns out negative after five days. So far, a country has been classified as a risk area if the seven-day incidence exceeds 50. According to Bareiß, this first stage remains. Quarantine is mandatory for these cases. A test does not have to be done, but it can shorten the quarantine.

It is still unclear exactly how the new compulsory test for travelers from “high-risk areas” would work. A spokesman for the Ministry of Health said on Monday that discussions were still ongoing. The new model regulation could already be decided in the federal cabinet on Wednesday. But it is up to the federal states to implement the regulations. Therefore, the rules may differ from country to country.

In Saxony-Anhalt, for example, special rules for vaccinated travelers have been in place since last Friday. People who can prove that they have been fully vaccinated against the coronavirus at least 14 days prior to entry no longer have to go to quarantine at home – even if they entered from a risk area. The State Ministry of Social Affairs announced in Magdeburg on Monday. The same applies to people who were verifiably infected with the coronavirus at least three weeks ago and a maximum of six months ago. With the regulation, the corresponding quarantine model ordinance of the federal government will be implemented, it said from the ministry.

The special regulations for vaccinated people meet with criticism in many places. Lower Saxony announced on Friday that it did not want to implement the model ordinance. The Federal Ministry of the Interior also pointed out that it was still against “privileges” for vaccinated people, as this could lead to indirect compulsory vaccination. However, this political stance, according to which there must be no “privileges”, must also be held in court.

Return from Syria: The children of IS

IShares Short-Term Corporate Bond ETF: How important is this development? ...

According to studies, smart watches can detect Covid-19 early

voestalpine stops the downward spiral in the third quarter