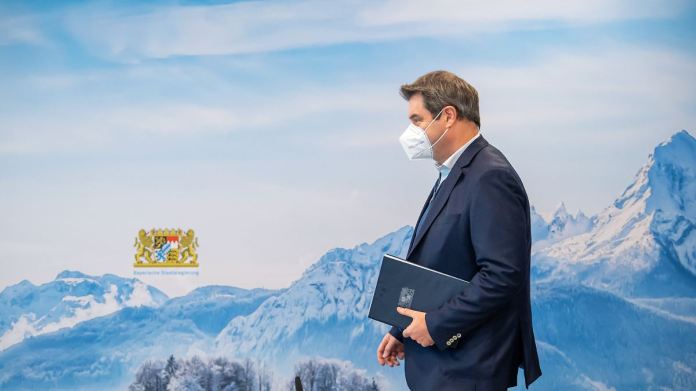 FFP2 masks and curfew
Will Bavaria become a blueprint for the federal government?

In Bavaria, an FFP2 mask is required in retail and local transport from today.  The re has been a night curfew in the Free State for weeks. Do the Bavarian regulations set a precedent nationwide? One day before the federal-state summit, anything seems possible.
At the federal-state talks on Tuesday, curfews and an FFP2 mask requirement in rail traffic will probably also be wrestled. “

The re is a selection of possibilities on the table”, said Federal Minister of Economics Peter Altmaier of the “Rheinische Post”. In addition to the FFP2 mask requirement in rail traffic and the curfews, he also mentioned a home office requirement and clearer contact restrictions. Vice Chancellor Olaf Scholz said that he expected the federal and state governments to tighten the corona restrictions and extend them by two weeks.

In Bavaria, people have had to wear FFP2 protective masks on buses, trams, underground and suburban trains and in all shops since the early hours of the morning.

The re is also a night curfew between 9 p.m. and 5 a.m. in the Free State. Before the consultations on Tuesday, Bavaria’s Prime Minister Markus Söder sees his own state in the fight against the pandemic already well positioned. “We don’t need to pull a screw anymore, I think,” said the CSU boss on Sunday evening on the ARD talk show “Anne Will”.

Instead, Söder called on the other countries to implement the decisions made at the Prime Minister’s Conference more consistently. “Half of the countries do something completely different,” he said. “So that you have to keep asking the question: Why do we decide something when half do it differently.” Söder called for a consistent application and implementation of what was decided in Berlin. “I also don’t believe in endless differentiations – only what applies to everyone is understandable.” Söder sees the regulations in Bavaria as a kind of blueprint for federal regulations. According to information from the “Business Insider”, the Chancellery even wants to introduce a nationwide uniform night curfew, as it already exists in France or other neighboring countries. From the federal states, however, one can also hear that everything is currently being discussed that can be discussed.

Lauterbach for a three-week lockdown

Vice Chancellor Olaf Scholz told the “Bild” newspaper: “Further measures must be taken.” (…). “I assume that it could already be 14 days that will come again.”

The  Vice Chancellor did not want to rule out whether this also includes curfews: “I think this is a possible measure, but not the first one to come.”

Scholz’s party friend, the SPD health expert Karl Lauterbach, even spoke out in favor of a tough three-week lockdown.

The  growth of the mutation must absolutely be prevented, he wrote on Twitter. Otherwise the mutation will spread “faster than we can vaccinate”. In his view, curfews from 8 p.m. are justifiable for three weeks. For local public transport, he advocates maximum occupation limits and FFP2 mask requirements.

So there is still a lot of need for coordination in front of the federal-state switch. On Monday, the leaders of the federal and state governments will be informed about new findings by leading scientists. “

The re are those who they all know,” said Hesse’s Prime Minister Volker Bouffier at “Anne Will” and named RKI President Lothar Wieler and Charité virologist Christian Drosten. On the question of why the federal-state meeting on Tuesday was scheduled so quickly and why the situation is so urgent, Bouffier said: “What we cannot assess is the British virus. That is the reason why we are meeting now.” This time scientists from Great Britain will also be there. “It will be about: What knowledge do you have.”

In Great Britain, a more contagious mutation of the coronavirus has spread widely, which has now also been detected in Germany. A comparable variant has also appeared in South Africa.

The re is a risk that the dynamics will accelerate again if the virus mutations continue to spread, said Altmaier. “That is why we must now – and this is explicitly my opinion as Minister of Economics – at the Prime Minister’s Conference set the course so that we can finally break the wave of infections in the next few weeks and prevent the dynamic from rising again until Easter.”

SPD leader Saskia Esken spoke to “Anne Will” like Altmaier of the home office obligation: You may have to order home office in the company, she said. Scholz also called for companies to be more accountable when it came to home office matters, and that it could “not stay with appeals,” he said in the “Bild” newspaper. “We have to go one step further.” But he did not want to talk about an obligation to work from home: It will always depend on “that this is also operationally possible. We want to remain pragmatic and not ask for the impossible”.

Green parliamentary group leader Katrin Göring-Eckardt calls for an initiative to expand corona rapid tests in the fight against the virus. “With purchase guarantees and a change in the medical product dispensing regulation, Health Minister (Jens) Spahn must ensure that sufficient rapid tests are produced and can also be bought and used by private individuals,” said Goering-Eckardt to the newspapers of the Funke media group. According to Göring-Eckardt, regular rapid tests should ensure more safety in all professions in which people regularly work with changing contacts. She cited doctors, nurses and police officers as examples.

Shiite leader al-Sadr jumps into the breach for the Pope

Waiblingen-Neustadt: Two injured drivers in a traffic accident on the main...

Geiger and Eisenbichler convince in qualification