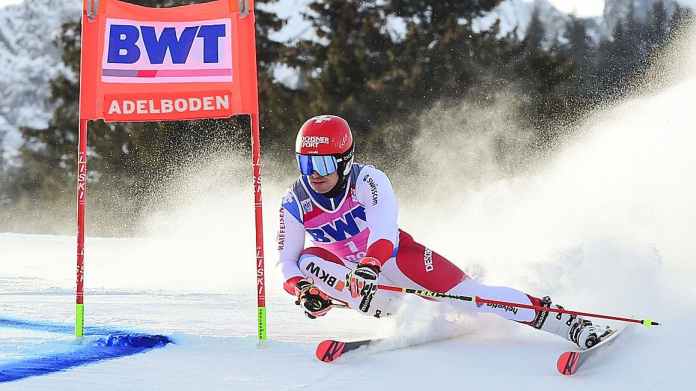 The Swiss put the stamp on the first run of the second giant slalom in Adelboden. Loïc Meillard is in the lead, Marco Odermatt is third, Gino Caviezel eighth, Justin Murisier ninth. The American Tommy Ford falls badly.

Number 1 was again the program. Like Alexis Pinturault on Friday, Meillard was also the first to set the fastest time. The Frenchman had laid the foundation for his victory with a lead of just under a second, while the Neuchâtel started the ranking three tenths ahead of Pinturault.

At least one podium place is long overdue for Meillard this winter. In the previous five giant slaloms, he was twice fourth and once each fifth and sixth. The last time Meillard was in the top three in this discipline was a year ago in Garmisch – second behind Pinturault.

Odermatt, who the day before had secured the first Swiss podium in the giant slalom on Chuenisbärgli in third place in 13 years, lost seven tenths to Meillard. Most of his backlog he dealt with a mistake shortly before the finish. Caviezel showed a strong reaction after leaving on Friday, and Murisier once again proved his consistency at a high level. Cédric Noger lost 2.7 seconds, but can still hope for the first final qualification this season.

The first round was marked by a heavy fall by Tommy Ford on the finish slope. How badly the American was injured was initially unknown. The race had to be interrupted for half an hour to recover the Ford, which had fallen upside down and was transported away by helicopter.

The day before, Semyel Bissig had been one of the fall victims. The Nidwaldner felt knee pain after the failure, which did not allow the start on Saturday.

Back to HomeBack to Sports

Joe Biden’s Team: Who is now important for Germany

Utawarerumono: Prelude to the Fallen: PC launch of the tactical role-playing...