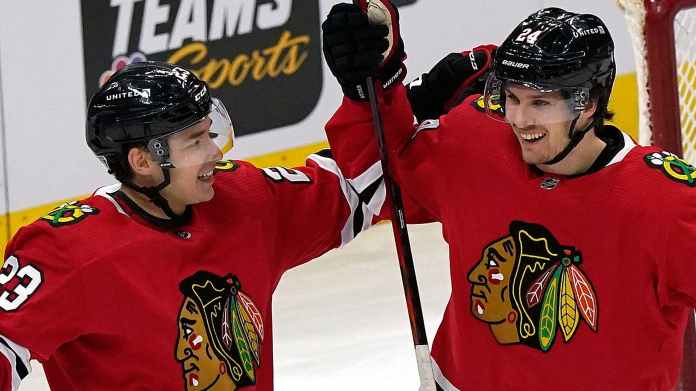 Pius Suter, who was the top scorer in the National League last season, has now made it to the NHL. In his sixth game with Chicago, he scored the first goals and the first hat trick.

Accordingly, Pius Suter was the big figure in the Blackhawks’ 6-2 victory over the Detroit Red Wings and Chicago’s second win of the season.  The  24-year-old from Zurich with roots at EHC Wallisellen played in Chicago’s first storm line between Captain-Superstar Patrick Kane and Alex DeBrincat.

With his first two NHL goals to 1-0 and 2-0, Pius Suter just had to push it into the open housing after some nice preparatory work. On the other hand, when the goal was 5: 2, Suter brilliantly took over the puck in the neutral zone, attacked and defeated goalkeeper Jonathan Bernier with a perfectly placed wrist shot.

Before the start of the season in the NHL, Suter played six games in both the Swiss League and the National League. He scored two goals each for the GCK Lions and the ZSC Lions. In his first six games in the best league in the world, he has already scored three goals.

With Philipp Kurashev, the second Swiss player in the ranks of the Blackhawks scored 6-2.

Back to HomeBack to Sports

Milan takes the league lead in the last second – football

Location guarantee and major investments in the army in Upper Austria

Donald Trump: What Merkel thinks about his Twitter lock

Coronavirus infection: that’s really how high the risk is in buses...