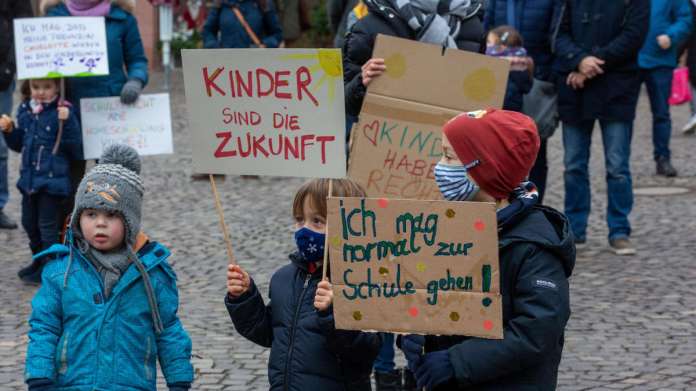 Around 100 children and adults respond to the call of the citizens’ initiative “Families in Crisis” and protest in Frankfurt. You are calling for solutions to the corona crisis.

Frankfurt – Luise came to the Römerberg on Saturday afternoon with swimming goggles on. Around 100 children and adults have gathered in front of the fountain of justice to demonstrate against closed schools, among other things, under the motto “No lockdown for children’s rights”.  The  citizens’ initiative “Families in Crisis” had called for this.

Many of the participants, who stand next to each other at Corona-compliant distances and masks, are holding signs in their hands. It reads, for example: “Home office instead of homeschooling” and “Children need children! School! Sport!”. Luise, who came with her parents and brothers, also holds up a sign that reads: “I want to train”.

The  13-year-old reports that she has not had any swimming training for at least half a year. Mother Katrin, who does not want to give her surname to protect her daughter, corrects: Since March last year, the club swimming has been canceled. Luise says: “I lack structure and my friends, but above all I miss school.” Learning at home is difficult.

The  seventh grader missed the exchange with teachers, especially in history lessons: “You read two pages of text and still haven’t understood anything.”

Stephanie Dinkelaker, spokeswoman for “Families in Crisis”, says: “We urgently need a perspective for older children from the seventh grade onwards.” She adds, “Children this age need their peers, and it’s not okay for them to be locked away for such a long period of time.” Not even playing football on the football field is currently allowed. Markus Bahrke, also a member of the initiative, asks rhetorically: “If children contribute less to the infection process, why do we lock them away?” Something has to change from mid-February. “From tomorrow” and “From now” are two heckling that can be heard from the crowd.

Ayse Dalhoff, city councilor of the Left and co-founder of “Families in Crisis”, demands: “We need more support from the authorities, a lot more concepts and a lot more clarity.” Adolescents should be protected from “loneliness, isolation and domestic violence”.

In her speech, head of education, Sylvia Weber (SPD), addresses three little boys who stand in front of her with signs in their hands and look up with big eyes. “I’m doing everything I can to ensure that you can soon go to school normally again,” says Weber, referring to one of the signs. “I am also responsible and last week agreed with the providers to exempt the parents’ fees for daycare centers and after-school care centers for January.”

The  head of education receives restrained applause. What they are demanding from the state are, for example, “FFP2 masks for all teachers in schools and daycare centers,” said Weber.

Luise’s mother supports this proposal. Basically, she would like to see “approaches beyond school closings”. She says, “Locking up is just not very creative.” Regular corona tests with students and teachers, which have proven themselves in other countries, are a possible alternative. (Clemens Dörrenberg)

“Clubhouse”: Hype about the new social media app – all of...

Geiger just missed the podium – Kubacki won with a hill...

Study says: iPhone 12 problematic for pacemakers due to MagSafe

Apple is said to be planning autonomous electric cars from 2024