On New Year’s Eve in Frankfurt, a young person is hit by an incoming subway and seriously injured. A passerby probably saved his life.

Frankfurt – On New Year’s Eve, there was a serious accident at the subway station, which would have been fatal without the presence of mind of a passerby. A teenager was hit by a subway train and seriously injured.

That could have turned out worse. On the phone and ignoring a red light, a 16-year-old wanted to run across the tracks at the “Weißer Stein” underground station on Thursday evening ( December 31, 2020). At least that’s the current status of the police investigation. The young man is said to have overlooked the incoming U8, which was heading towards downtown Frankfurt. Just a few months ago, a 15-year-old was hit by an underground train in Frankfurt Heddernheim and seriously injured.

Emergency braking of a subway in Frankfurt: teenager seriously injured

Several witnesses saw the disaster coming, a passerby reacted with presence of mind and pulled the teenager back. The subway driver also tried emergency braking at the last second – but too late. The subway caught the 16-year-old and seriously injured him. He was admitted to hospital with serious but not life-threatening injuries.

How the accident came about and further details will be brought to light by the investigations of the current days.

Osaka in the Melbourne final – S. Williams in tears

Ed Sheeran turns 30: How the red-haired Brit rose to become... 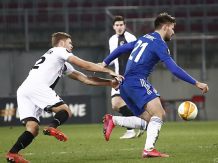 Further disruptions at Lernsax after a hacker attack