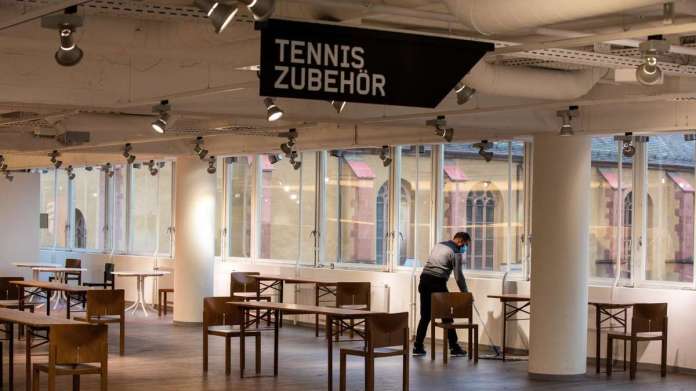 The winter campaign for the homeless and poor of the Sankt Katharinengemeinde has been taking place for 34 years. Many Eintracht fans are helping out this year.

Again this year, despite the corona pandemic, the traditional winter campaign of the Sankt-Katharinen-Gemeinde for the homeless and poor will take place from January 11th to 31st. Then the doors will be open to visitors from 11.30 a.m. to 5 p.m.

The community has been organizing its aid campaign for 34 years. However, the venue is new this year. Because there is not enough space in the church to be able to guarantee sufficient distance, the action takes place opposite, in the premises of the former sports arena in Kleiner Hirschgraben. The real estate company Signa Real Estate provides the rooms.

Due to the pandemic, the winter campaign was on the brink for a while. In the summer, however, a conversation between Olaf Lewerenz, parish priest of the Katharinengemeinde, and Jürgen Mühlfeld, head of the Weser 5 homeless facility, led to a rethink. “Mühlfeld said that especially at this time, actions for the homeless are more necessary than usual,” reports Lewerenz. He saw the empty building of the old sports arena and made contact with Tobias Sauerbier.

help for the homeless

In the emergency quarters on the B level According to Social Affairs Director Daniela Birkenfeld (CDU), 90 to 92 people stay overnight at Eschenheimer Tor every day. 425 beds are available in emergency shelters, according to Birkenfeld. If necessary, the number of free beds could be increased. Who homeless people sees on the streets at night when it is very cold, please inform the cold bus at 069/431 414. stn

Sauerbier is the CEO of Signa. “Especially in these difficult times, it is a matter close to our hearts to support the St. Catherine Church’s winter campaign,” he says.

To reach the spacious room on the third floor, guests have to go through the stairwell via the back entrance in Kleiner Hirschgraben next to the Teufel wine shop. If this should be a burden for you, you can also use the elevator, says Lewerenz. There are security personnel at the bottom of the entrance, “but only to check so that not too many people come,” asserts Lewerenz. Because a maximum of 50 guests and twelve volunteer helpers are allowed to stay in the bare room at the same time. “The people are brought to their place and served like in a restaurant,” says Julia Eckelhöfer, member of the board of the church community. Two people are allowed to sit at the tables at a sufficient distance.

Guests can choose between a meat and a vegetarian dish. There are also soft drinks. And if you don’t want to go out into the cold after dinner, you can lie down on mats or camp beds in the relaxation area and sleep.

For Eckelhöfer, who is responsible for organizing the helpers and who joined the Katharinengemeinde four years ago through the Eintracht fan project “Adler im Herzen”, it was not easy to find volunteers for the winter campaign. “Many of our regular employees are over 70 years old. Many canceled this year out of self-protection, ”she says. But from the circle of Eintracht supporters: so many volunteers could be found inside that they now make up the majority of the helpers.

Biathlon today in the live ticker: The women’s sprint in Hochfilzen...

Mass death of birds on New Year’s Eve in Rome –...

Ssp Group Plc: You can only be amazed? ()