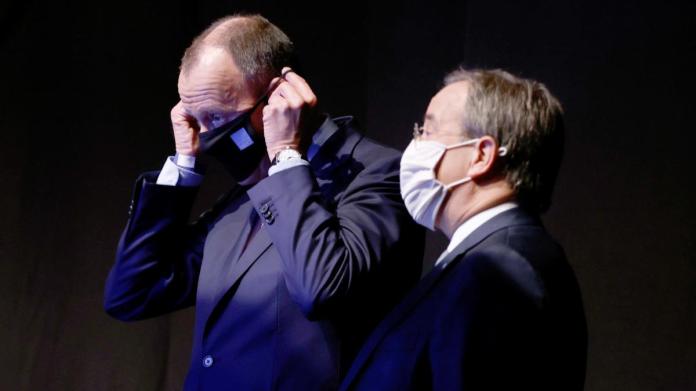 Germany After defeat at the CDU party congress

Friedrich Merz did not make it again:

The  CDU chairmanship goes to his rival Armin Laschet. He explains why he did not run for the presidium and offers himself as Minister of Economics. Angela Merkel’s reaction followed quickly.

Chancellor Angela Merkel (CDU) does not want to reshuffle her cabinet. “

The  Chancellor is not planning any government reshuffle,” said a government spokesman on Saturday upon request.

After the party congress, Merz justified why he had not run for the presidium. “

The  CDU cannot only be run by men from North Rhine-Westphalia. Even fewer women would have been elected to the Presidium if I applied. I have therefore decided to forego running for office in favor of women. “

After his second defeat in the race for the CDU party chairmanship – first against Annegret Kramp-Karrenbauer and now a good two years later against Armin Laschet – the former Union parliamentary group leader left it open shortly after the election.

“Dear Armin, dear new chairman of the Christian Democratic Union of Germany, congratulations on your success,” Merz began his brief address. He thanked us for the “good cooperation” over the past ten months. “I wish the CDU with the new leadership … good luck,” said the 65-year-old.

It will be an important year, “an enormously exhausting time for all of us, which has to be passed in the next few weeks and months,” said Merz, referring to the super election year 2021 and the Corona crisis. He concluded with the words: “And you, dear Armin: good luck with what you are planning to do now.”

Merz briefly repeated his congratulations on Twitter. “Now it is important that we all work together as a team for a modern and recognizable CDU that inspires and wins elections,” he wrote.

Also inferior Norbert Röttgen congratulated Laschet and wished him every success for the election year.

The  55-year-old, who, unlike Merz, is a member of the Bundestag, emphasized that he stood by his word and would now support Laschet with all his might. “You can count on me. We have to form a team now, ”he said.

Accordingly, Röttgen also applied for a seat on the Presidium. “I want to make my contribution to the team,” says Röttgen in his application speech. In the end he was elected with 764 out of 945 valid votes.

Laschet had previously thanked his two competitors for the fair election campaign. Such a long competition always carries the risk of increasing aggression, irritability and small peaks. Addressing Merz, he emphasized that he wanted to do a lot together in the future.

“Damn important that Merz stays on board”

The  CDU economic politician Carsten Linnemann had asked Merz to be elected to the CDU presidium. He was disappointed that Merz was not elected head of the CDU, said the chairman of the MIT SME association on the Phoenix broadcaster. It is important to merge the camps in the CDU now. “That doesn’t happen overnight,” Linnemann emphasized.

About Merz, he says: “I think it is damn important that he stays on board.” Merz was a candidate for “the base”.

Linde board member Lamba is probably the successor to boss Angel...

Dornbirn Bulldogs with four goals in 14 minutes to victory –...

Nuclear dispute with the US: Iran reduces cooperation with the IAEA

ATX after strong days with clear correction; RBI and OMV...