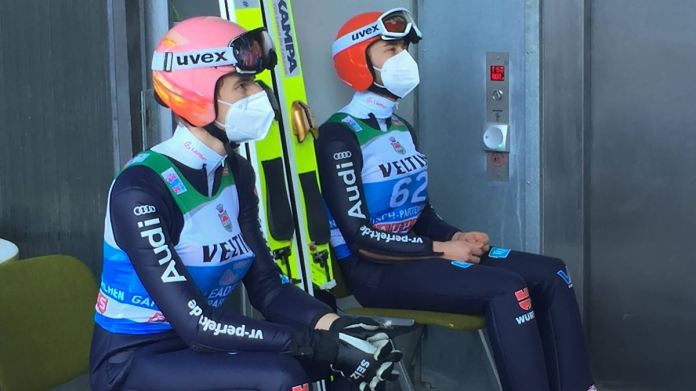 Geiger wants to “box in”
“Bergisel is just a stupid pig”

The tour victory is out of reach, but the tour has not yet been ticked off: Karl Geiger and Markus Eisenbichler still don’t know exactly how the cold shower in Innsbruck came about – but they are already fighting again for the final.
Karl Geiger’s really big anger was gone when the German ski jumping entourage left Innsbruck and the damned Bergisel in the direction of Bischofshofen on Monday morning in dreary winter weather. Instead, the flying world champion had rediscovered his aggressiveness. “At the end it will be a great challenge,” said the 27-year-old with a view to the finale of the 69th Four Hills Tournament: “I want to box in there and finish well.”

He had to nibble on that bitter Sunday in Innsbruck when he crashed to 30th place with the first jump and lost practically all chances of the first German tour victory since Sven Hannawald 19 years ago. “I just didn’t understand what happened there. I felt good, I was in competition mode – in the end it was a chain of unfavorable circumstances,” said Geiger, who had largely ticked this off on the day off: “It’s a bitter pill that I just have to swallow. ”

“The Bergisel is a blede pig”

Before the fourth competition on Wednesday (4.45 p.m.), which is preceded by the qualification on Tuesday (4.30 p.m. / both on ZDF and in the live ticker on ntv.de), the 27-year-old is fourth overall, behind defending champion Dawid Kubacki leading Poland Kamil Stoch is the equivalent of 13.5 meters. Markus Eisenbichler in fifth is another five meters behind.

“A lot would have to happen to catch the Poles,” says Geiger: “But I don’t care how far away they are. I’ll give everything, but I have to look away from the overall standings.”

Eisenbichler, after all sixth in Innsbruck, looked ahead again. “The Bergisel is a stupid pig every now and then,” said Eisenbichler about the hill where he became world champion in 2019. But he whistles on the tour podium as a consolation for the missed victory: “I’m not interested in the podium. If so, I gwinna, I’ll be completely honest. But we’ll attack there. I won’t give up on myself, that’s my nature . ”

Only a miracle will help

In the meantime, it is almost in the nature of the tour that the DSV-Adler had come to Innsbruck with every chance of overall victory, as so often, but crept on to Bischofshofen, as so often, but broken. This time, not even a fall like Severin Freund 2016 or Richard Freitag 2018 cost her the chance of the redeeming first Four Hills triumph after almost two decades – none of the top nations have to go through a longer touring dry spell.

“A miracle should happen now,” said national coach Stefan Horngacher, ticking off the fight for the golden eagle, at least for this winter. The history of touring shows that miracles are rare in Bischofshofen. In the past 20 years only once did the leader to Innsbruck fail to win the overall ranking: In 2016/17 the Norwegian Daniel Andre Tande failed in the final, while Stoch won his first title. A race to catch up from beyond the top 3 was only successful in gray Schanzen antiquity: In 1958, Helmut Recknagel came fifth to “B’hofen” and was the first German to win the tour.

Horngacher, who as coach led Stoch to two tour victories as a coach, sees the fact that the great pressure is no longer on his top duo as an opportunity. “The steam is out a bit. I hope that there will be more looseness,” he said: “We have to look ahead, we still have a World Cup in our own country. We must definitely not let the situation drag us down now.”

Stuttgart despite (t) Corona: Your pictures in the “Life” category –...

Seven-day incidence in Germany rises to over 100 | News...

Accept the ban on demos and do not go to Berlin