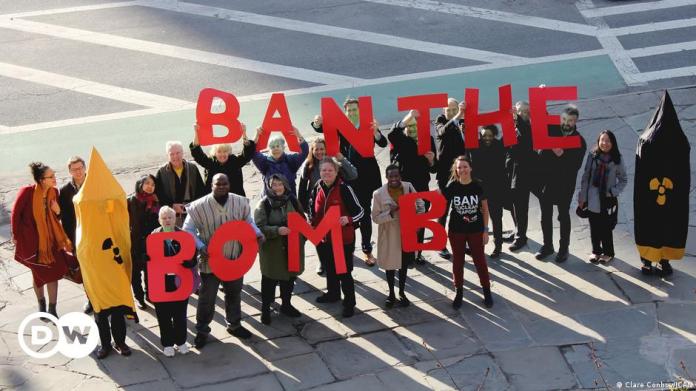 January 22nd is a historic day for those who oppose nuclear weapons:  The  Nuclear Weapons Prohibition Treaty, which was negotiated under the auspices of the United Nations in 2017, comes into force. It prohibits the contracting states from producing, storing, selling or using nuclear weapons.

“A milestone,” says ICAN, the International Campaign for the Abolition of Nuclear Weapons. With a countdown on their website, the opponents of nuclear weapons feverishly awaited the entry into force. Now there is “much more pressure being exerted on the nuclear-armed states to finally implement their old promises of nuclear disarmament,” said Leo Hoffmann-Axthelm, ICAN representative in Brussels, to Deutsche Welle.

The  2017 campaign was awarded the Nobel Peace Prize for its work against nuclear weapons.

Nuclear disarmament comes to a standstill

In recent years, nuclear disarmament has stagnated, of which there are an estimated 13,400 worldwide, a good 90 percent of which are owned by the US and Russia. In addition, China, France, Great Britain, Pakistan, India, North Korea and Israel have nuclear weapons.

The  nuclear powers are currently investing a lot of money in modernizing their nuclear weapons and making them more effective.

Modernization instead of disarmament – many non-nuclear weapon states no longer wanted to accept this situation. At the United Nations, they negotiated a treaty that outlaws nuclear weapons and prohibits their possession. In July 2017, 122 states accepted the treaty in New York. Now that it has been ratified by 51 states, it can now come into force. 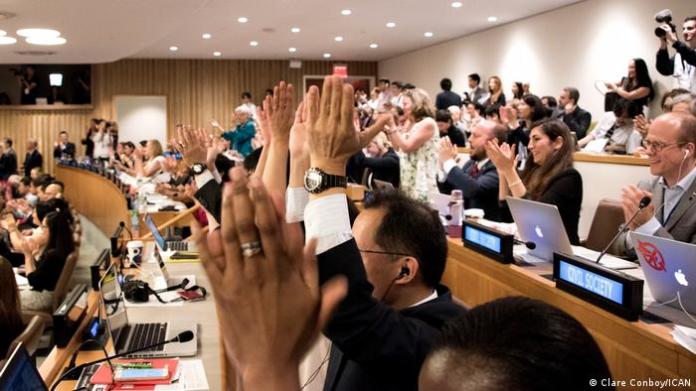 The  Treaty on the Prohibition of Nuclear Weapons was adopted by the United Nations on July 7, 2017 with great applause

Rejection of the nuclear powers

So far, countries in Africa, Latin America and Asia have mainly joined the treaty.

The  response from Europe, however, remained meager: from the European Union only Austria, the Republic of Ireland and Malta are involved.

The  biggest gap, however, is on the part of the nuclear powers:

The y flatly reject the treaty.

The  same applies to the 30 member states of NATO. This is not surprising: nuclear weapons are essential for the defense strategy of the transatlantic alliance. “As long as nuclear weapons exist, NATO will remain a nuclear alliance,” declared NATO on December 15, 2020. Since the ban on nuclear weapons only legally binds the contracting states, the alliance does not feel obliged to do anything.

Germany is staying away

This stance is shared by the federal government, which has US nuclear weapons on German territory to deter them. This NATO concept is called “nuclear participation”. An estimated 20 US atomic bombs are stored at the Büchel Air Force base in Rhineland-Palatinate in southwest Germany. In an emergency, pilots of the German air force would have to fly the bombs to the target and drop them. In the exercise “Steadfast Noon”, the Bundeswehr rehearses this scenario regularly together with European allies.

Accession to the Nuclear Weapons Prohibition Treaty is therefore out of the question for the federal government. Government spokesman Steffen Seibert justified Germany’s stance in October 2020. “As long as this is the case and Germany and Europe are also threatened by it, we believe that there is a need to maintain a nuclear deterrent. Some states continue to regard nuclear weapons as a means of military conflict.” . “ 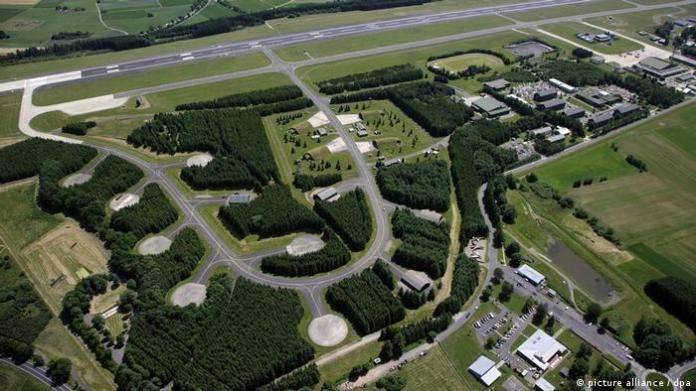 A separate category of weapons

But what can a prohibition treaty that nuclear weapon owners and their allies reject? Not much, speculates Jonas Schneider, nuclear weapons expert at the Berlin Science and Politics Foundation. Although the treaty had received great praise from the start, it would not lead to a paradigm shift in nuclear disarmament. “

The  states that have nuclear weapons benefit immensely from them, in terms of defense policy and in their relations with other states,” says Schneider. “For example, they are very valuable cooperation partners for others.”

In addition, nuclear weapons simply cannot be replaced by conventional weapons, even in large numbers. “

The  nuclear weapons expert argues that the disarmament of nuclear weapons can only be worked out gradually and in cooperation with the nuclear powers. It doesn’t work in the “vacuum”.

“Everyone has to sit at the table”

The  supporters of the prohibition treaty do not share this view of things. Nuclear weapons pose such a great danger to mankind that the nuclear powers cannot work out this question among themselves. “This contract is needed to make it clear that nuclear weapons concern everyone and that everyone has to sit at the table,” emphasizes Leo Hoffmann-Axthelm from ICAN.

The  opponent of nuclear weapons is betting that the treaty will change the discourse on nuclear weapons permanently. “In ten years’ time, politicians, journalists, academics and the general public will have in the back of their minds that nuclear weapons are outlawed under international law. That is why they will no longer be such a status symbol, but rather something to be ashamed of.” 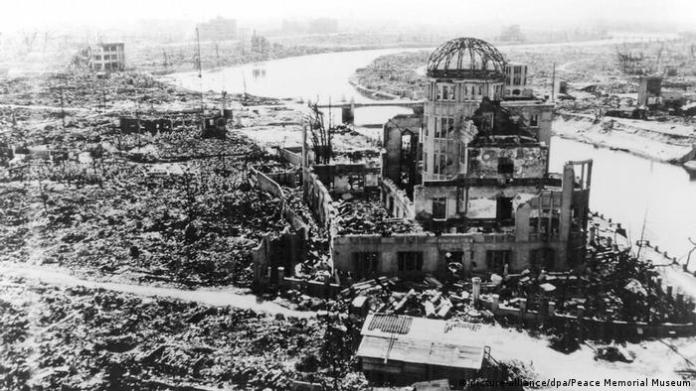 In August 1945, the Japanese city of Hiroshima was destroyed by a US atomic bomb

Joining in five to ten years?

According to Hoffmann-Axthelm, it is “only a matter of time” before Germany joins the treaty. He expects this in the next five to ten years. That would be possible: even a country that stores nuclear weapons on its territory could ratify the treaty. It would then have to commit to withdrawing nuclear weapons within a certain period.

Nuclear weapons expert Schneider from the Berlin Science and Politics Foundation is much more skeptical: If Germany or another NATO country should join the treaty, he would be “isolated and politically stigmatized within the alliance,” he predicts. “This state would by no means become a new pioneer for nuclear disarmament within NATO.”

While the federal government rejects the treaty, there is considerable support among the population: in surveys, more than two thirds of German citizens are in favor of Germany joining the nuclear weapons ban treaty. Almost 170 members of the Bundestag, more than 100 German cities and four federal states have called on the federal government to take this step. So also Rhineland-Palatinate, where the US nuclear weapons are stationed. 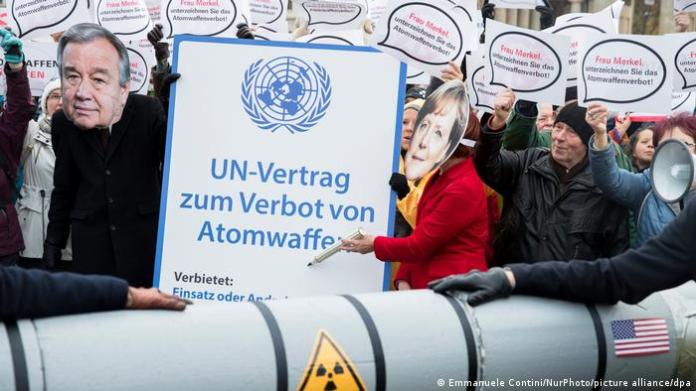 In Berlin, opponents of nuclear weapons demonstrate for Germany’s accession to the ban treaty

The  Federal Government, on the other hand, maintains that it is in principle also for a world without nuclear weapons – only the Prohibition Treaty is not the right way to achieve this goal. Federal Foreign Minister Heiko Maas is convinced that a treaty for the disarmament of nuclear weapons in which the nuclear powers are not involved is of no use.

Maas considers the Nuclear Non-Proliferation Treaty of 1970 to be the more appropriate framework for disarming nuclear weapons. 191 countries have joined it, including five countries that have nuclear weapons. Germany is also a member.

The  new nuclear weapons prohibition treaty is already highly controversial on the day it comes into force:

The  skeptics are convinced that it will bob around in front of them largely ineffective: it will not make a single nuclear weapon disappear from the earth.

The  89-year-old Setsuko Thurlow, who survived the atomic bomb attack on Hiroshima in 1945, has a different opinion: she sees the beginning of the end of nuclear weapons.

“Thinking outside the box” demo in Leipzig: the car parade turns into a flop

MARKETS USA / Wall Street expected to be slightly in the...

Is face-to-face teaching the right solution in the corona pandemic?

North Korea to become a tourist hotspot – does Kim open...

Werder Bremen promises transfers: “There will be some newcomers”